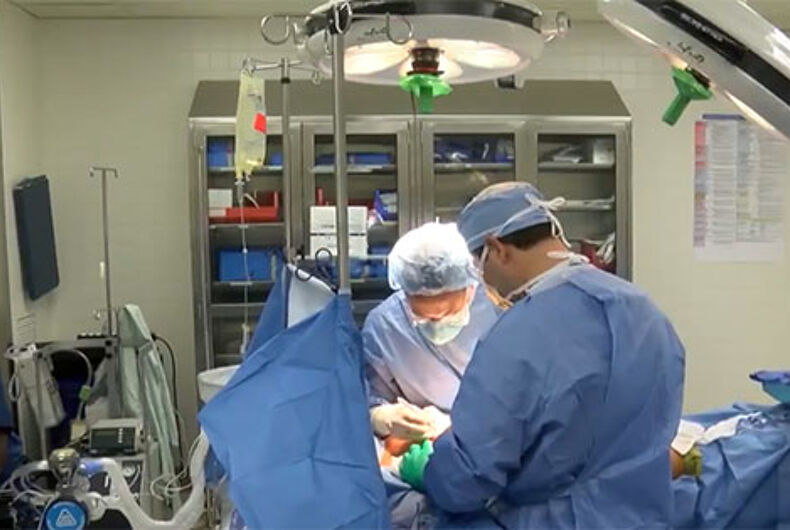 The world’s largest organization of board-certified plastic surgeons has for the first time released the number of gender confirmation surgeries performed in a single year: 3,256 male to female and female to male operations in 2016.

That’s an almost 20 percent rise from the prior year, said the American Society of Plastic Surgeons, in a report released Monday. A publicist for the ASPS could not disclose geographic information about where the majority of these operations were performed in 2016, as it is still being compiled.

LGBTQ Nation has learned exclusively that the majority of the GCS operations last year were performed on transgender women: 1,759, to 1,497 surgeries for trans men. That’s a 27 percent increase year over year for trans women and a modest ten percent boost for operations on trans men.

There’s more than one reason for the uptick in surgeries related to transgender transition, said Randi Kaufman, a clinical psychologist for the Gender and Family Project at the Ackerman Institute for the Family. She told USA Today that the surge could be a result of greater representation of transgender men and women in entertainment media combined with increased insurance coverage.

“While there is still a lot of discrimination and violence and hate crimes that continue against transgender people, there are a lot of positive role models out there now and it’s becoming more accepted and normalized to know someone or have a family member or friend who is trans,” Kaufman said in a phone interview with the paper.

Michael Hendricks, a clinical psychologist also interviewed by USA Today, suggested a law which requires any insurance policy based in Washington, D.C. to cover these types of surgeries may increasingly become the norm.

“People have limited resources and insurance is now covering the basic surgery,” Hendricks said, “so they may have funds to do other surgeries or types of procedures they wouldn’t have had money for previously.”

Absent from the report was any mention of surgical complications and the rate at which they occurred in 2016, which according to trans surgeon Dr. Marci Bowers are always a risk in any kind of surgery, “no matter how simple the surgery and GCS is most certainly not simple,” she told GO Magazine.

“These surgeries include a wide variety of procedures with individual complication rates which correlate with the particular surgery in question and with the surgeon involved,” Bowers is quoted as saying in the article. “Rates can vary from rare to as much as 30 percent in urethral lengthening procedures,” part of the female to male procedure. “Fortunately, with time, most incisional complications resolve themselves without intervention beyond local wound care. Unfortunately, genital surgery places great pressure on artistry with complexity of these procedures confounding all but the most precise of surgeons.”

“This survey didn’t include information on complications so there are no results to report on that aspect at this time,” a spokesperson for ASPS told LGBTQ Nation.

Gearah Goldstein is a transgender woman who worked with one of the 7,000 board-certified surgeons throughout her transition and appears in a YouTube video released by the ASPS. Goldstein said in the video she knew from a very early age that that her gender did not align with her body. She now feels that she can live her life as the person she’s always been.

“For transgender people, like myself, surgical options are a corrective treatment, not cosmetic,” she said. “The types of surgeries someone has is very personal and private, and you wouldn’t even know someone had surgery if you saw them walking down the street. It’s not about how we’re perceived by the public, but how we perceive ourselves.”

“It has been a lifelong journey for me. Growing up, there wasn’t even a word for transgender. There were no role models or anyone to tell me that I could do something about this feeling of being disconnected from the body I was born with,” said Goldstein. “The reality that I lived through has allowed me to assure the next generation that there is nothing abnormal about what they’re feeling.”

Heartbreak for these 2 dads forced to surrender their newborn daughter