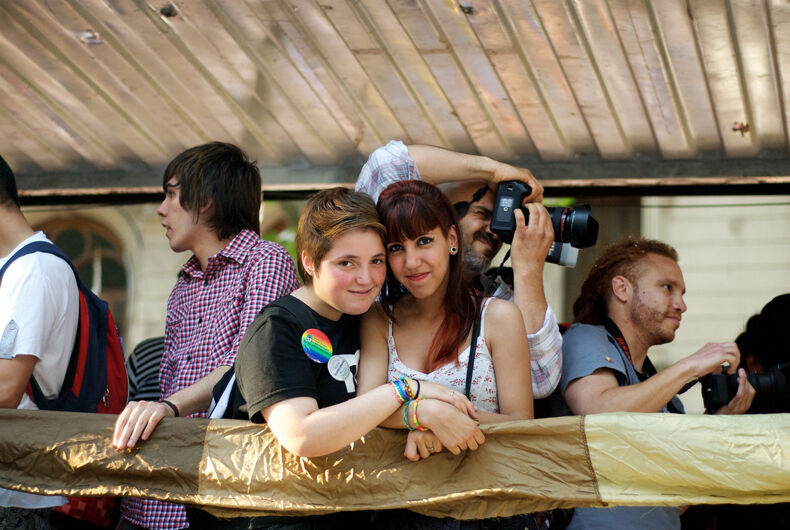 Why do women experience same-sex attraction? One researcher has a theory, and it’s a doozy.

“My argument in the paper is this: A considerable proportion of men desire same-sex attractions in women, and this is one possible reason why many women have such attractions,” Menelaos Apostolou, the lead researcher and a professor of evolutionary psychology in Cyprus, told Pink News.

Apostolou argued that, from an evolutionary perspective, same-sex sexual behavior among women could make them more attractive to men because such behavior creates the impression they’d be less likely to be impregnated by another man. As a result, he suggests, a man who pursues a bisexual woman would have greater certainty that any offspring was his.

The only part of this theory that Apostolou’s study confirmed, however, was something of a no-brainer — straight men are aroused by the idea of women getting down with other women.

“About half of the men in the sample reported that they would become sexually excited if their opposite-sex partners revealed to them that they experienced same-sex attraction,” he said.

About a third of the heterosexual men said they’d prefer a bisexual partner. Nearly as many said they’d like it if their female partner occasionally acted on those attractions.

Among straight women, only about 7 percent said they’d prefer a bisexual partner.

The study does not speak to attraction patterns over human history, and only reflects the attractions of its modern-day participants.

Not surprisingly, the study is eliciting skepticism from the scientific community.

“The paper totally ignores a lot of other possible hypotheses and makes claims that are really not supported by the evidence they provide,” said Diana Fleischman, a psychologist at the University of Portsmouth, told the International Business Times.

Other theories on why women experience same-sex attraction, or why straight men are more likely to consider that a desirable trait in a partner than straight women?

But Apostolou seems to have blinders on when it comes to potential cultural influences on modern sexuality.

“I can’t really see how cultural factors would make some men be turned on when their partners tell them I want to have sex with another woman. These kinds of sexual traits are more instinctive. It’s a mechanism that has been selected to serve a purpose – to make you reproduce. For me, these things are expressions of old mechanisms,” Apostolou said. “I’m not sure that factors like the media have an important effect. This is not something that is promoted, for instance, having a girlfriend who also has same-sex attraction. I don’t see it there.”

Enough about why men are into lesbian and bisexual women. What about the idea that women are into women because it serves their needs?