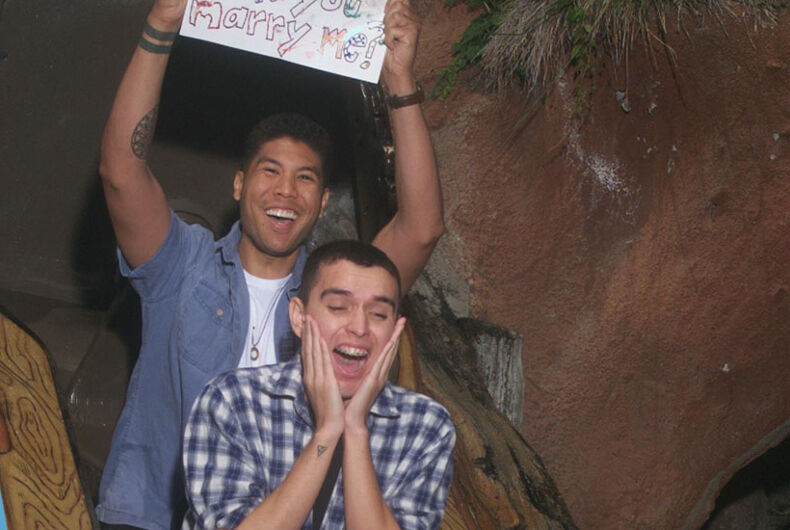 He’d been planning the proposal for months. When the day arrived, everything went according to plan. But when he showed his mother a photo of that special moment, she discouraged him from posting it to Facebook, saying she was “ashamed.” So he did one better and posted it to Reddit, where it has gone viral for all the best reasons.

Reddit user eugenius310 posted a photo of his picture-perfect Disneyland proposal to his boyfriend Chris on the Gay Bros sub-reddit yesterday with the subject line: “My mom told me not to post it on Facebook because she’s ashamed of me, so I’m posting it here for the world to see!”

Just eight hours later it had been up-voted nearly 30,000 times, landing on the site’s front page.

Other family members had helped him plan the proposal, with his niece and nephew assisting with the home made sign that read, “Chris, will you marry me?”

Before stepping onto the Splash Mountain ride, he suggested to his boyfriend that they make “shocked” faces for the camera as the ride makes its dramatic drop. He popped the sign up at just the right moment, and stashed it away again at the ride’s end so that Chris would repeat his surprised face when they went to view the photos.

“He had no idea I was proposing,” eugenius310 explained. “I quickly hid the sign away after the drop and when we exited the ride we walked to see our photo and he was shocked. I got down on one knee and asked him to spend the rest of his life with me. He said, ‘yes.'”

While the couple’s proposal was sweet on its own, its the reactions from other Reddit users that transform this happy ending into a happy-cry tear jerker.

“Straight bro here from /r/all y’all are a-god-damn-dorable,” wrote user eminently_weird. “Congratulations and wishing you a lifetime of health and happiness together. P. S. Sorry your mom sucks.”

Another straight man explained that he was in the sub-group in support of his son, and couldn’t understand the reaction from eugenius310’s mother.

“As a middle aged straight guy who subscribes to this sub because my son is not quite sure of his sexuality and I want to keep an open mind, I am often blown away by the overwhelming warmth of love I see on this sub,” user EINSTEIN420 wrote. “I am legitimately sorry your mom can’t feel the happiness that you have here. Shedding a No Homo manly tear for you right now and congrats to you and your partner.”

Others shared that they were perplexed by what there was to be ashamed of, suggesting alternate reasons.

“Your mom is ashamed of you because you are gay? Or because you proposed him in this way?” asked user dmthoth. “Btw congratulations, guys!!!”

“I’d be ashamed of you too. Such sloppy coloring,” user larardrian joked, apparently forgetting it was created by children. “Congrats btw.”

Whatever the reason, Reddit users encouraged the couple to stay positive and be proud of their love.

“I guess its a sign of the times, or maybe generations, because my first thought was ‘what’s to be ashamed of proposing on a Disneyland ride?!? that’s hilarious!’…then i realize its because you’re two men. That’s her objection,” wrote user ikilledtupac. “I am sorry that she thinks she feels that way, but try not to let it get you down.”

With all the love the internet is showering on this couple, that shouldn’t be a problem.