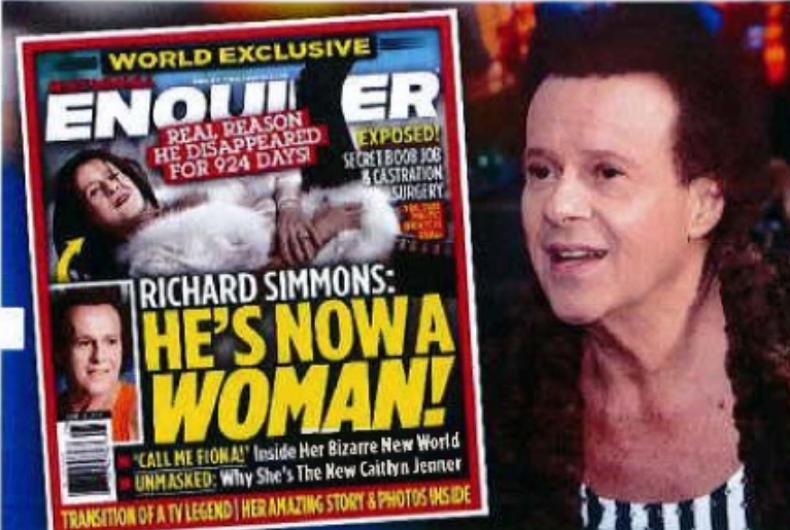 An image from one of the stories included as evidence in Simmons's defamation suit.Photo: Screenshot/Public filing

Richard Simmons, the fitness guru of the 80’s and 90’s who has been fairly reclusive in recent years, is suing the National Enquirer and Radar Online for defamation because they said he is a transgender woman.

Simmons’s lawyer is quick to point out that, even though he’s suing someone for calling him transgender, he has no problem with trans people.

“The cruel and malicious publication of these stories is particularly offensive because Mr. Simmons fully supports individual autonomy and the essential human dignity of every person to make his or her own personal choices regarding sexual identity,” the lawsuit asserts. “Mr. Simmons has been an avid support of the LGBTQ community for his entire life.”

He says that his lawsuit is about “a legal right to insist that he not be portrayed as someone he is not.”

Well, that’s not true. In order to sue, you have to be able to show damages. Defamation is no different. The legal definition of defamation requires that the victim’s reputation be hurt.

There is a history of suing for being labeled as part of an unpopular minority, and these suits send a clear message.

In 1844, the Mississippi Supreme Court ruled in favor of a white plaintiff who sued because someone said he was part black. While it is easy to show that there were material consequences if a white person was known to have “one drop” of African blood, the problem was the institutionalized racism, not that a white person might have gotten treated the way that black people were treated.

In 1900, the Louisiana Times-Democrat was sued for accidentally transcribing “cultured man” as “colored man,” which then got turned to “negro” by an editor. The judge understood that it was an error, but still ruled that it was “enough to arouse the most profound indignation of the most patient man.”

Well, assuming that the “most patient man” is white and racist.

Tom Cruise’s lawsuit that resulted in millions in damages because he was accused of being gay in 2003 was just wrong because there is nothing wrong with being gay.

But in 2009 Howard K. Stern, lawyer and reality TV star, saw his gay defamation lawsuit rejected. The judge cited the fact that sodomy laws were overturned by the Supreme Court as evidence that there is no “widespread view of gays and lesbians as contemptible and disgraceful.”

Simmons’s suit says that he lost business and personal contacts because of the stories. While this points to actual damages, “It sucks that I’m on the receiving end of transphobia” is not a convincing reason to sue for defamation.

Because where do transgender people go when they lose business because of transphobia? Not every state bans employment discrimination based on gender identity, and even in a state that does it’s just not possible to sue people for not buying your exercise video because they hate trans people.

At best, the message of this suit is “transphobia sucks when it’s directed at a cisgender person,” implying that transphobia is acceptable when directed at trans people.

At worst, the message is that there is something wrong with being transgender. Putting a little “I’m not transphobic, but…” disclaimer in the suit does not erase this message.

Actor Antonio Sabato Jr. will run for Congress in California