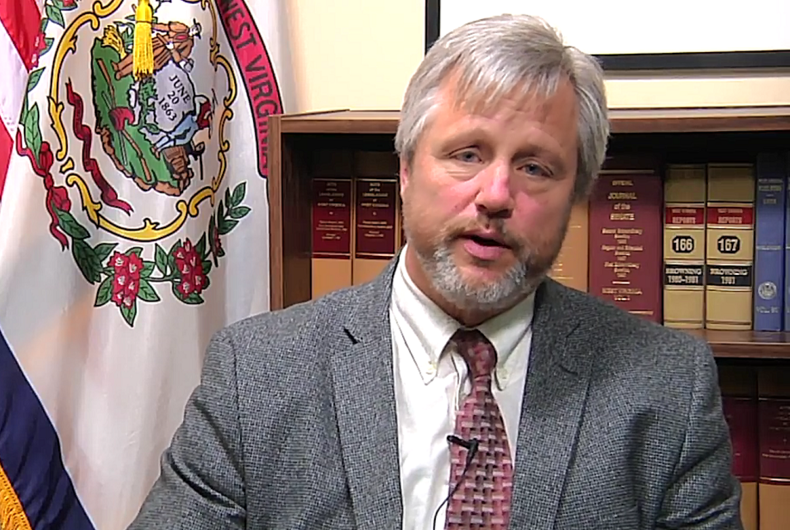 A Republican state senator in West Virginia suggested this week that billions of dollars in cuts to Medicaid that Donald Trump is proposing won’t be a problem if the state stops covering “transgender surgery.”

Because Republicans are generally unfit to govern.

The discussion was supposed to be about the state’s projected budget. Senator Mike Woelfel (D) asked Senator Robert Karnes (R) if the revenue plan that the senate just passed on Wednesday took into account proposed cuts to Medicaid in the American Health Care Act (AHCA).

Medicaid is health insurance for low-income and disabled people, funded both by the federal government and state governments. Trump, along with House Republicans, are pushing for a bill that would reduce federal funding of Medicaid by $834 billion over the next 10 years, which is 25% of the money spent on the average Medicaid recipient.

This means that either Medicaid recipients will be dropped or lose significant coverage, or state governments will have to step in to fill the gap. In West Virginia, 30% of the population is covered through Medicaid, so taxes will have to increase dramatically or health care access will have to be severely reduced.

This is a serious question that Woelfel raised, but Karnes didn’t have a serious answer.

My understanding of what the president’s proposing is to convert a lot of that into block grants, which gives us a lot more flexibility in terms of how we spend those dollars. For example, we won’t necessarily have to cover transgender surgery. We can choose to treat the child with cancer instead.

There’s just so much wrong with that.

First, the West Virginia Department of Health and Human Resources said that SRS isn’t covered by the state, which is shameful. It’s also a sign that Karnes gets his information about state spending more from Fox News than he does from, oh, I don’t know, his job.

Second, cutting SRS coverage wouldn’t be something to celebrate or even just shrug off. People shouldn’t lose access to vital health care, no matter who they are.

Third, even if West Virginia’s Medicaid program covered SRS, there’s no way that cutting that coverage would offset the billions of dollars the state would lose if the AHCA passes.

Fourth, the AHCA would result in 24 million people losing health coverage by the year 2026. Some of those people are children with cancer. Unless Karnes has an actual plan to provide coverage for them, he shouldn’t say that kids with cancer will get treatment.

Fifth, the current version of the AHCA doesn’t have block grants, it has a per-capita cap (PCC). They’re similar in that both restrict how much coverage a state can provide, but a PCC is based on the number of people who need coverage, whereas a block grant is just a fixed sum sent to each state. But both of these mechanisms reduce state flexibility, because if health care costs rise, the federal government won’t pay any part of it. And it should be obvious: a spending cap reduces flexibility.

All of this explains Woelfel’s response: “See, I thought we were having a rational discussion and you want to talk about transgender surgery. That’s enough, thank you.”

What else could he say? Judging from Karnes’s Twitter feed, he’s willfully ignorant about a lot of things and really hates listening to others.

It’s like a teacher asking a student who didn’t do the reading a question… except this student has spent years absorbing conservative propaganda and is now unable to answer even the most basic questions without barking out the rightwing cause du jour.