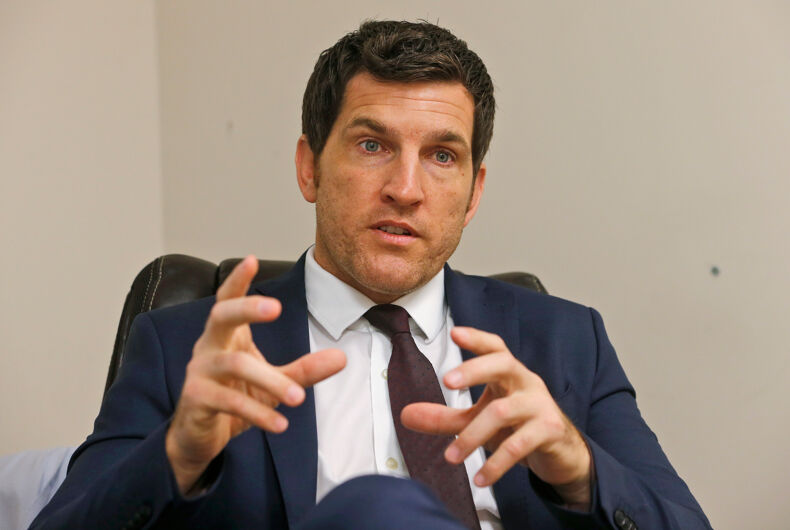 The Human Rights Campaign announced in a statement today that Taylor would get behind the Equality Act, reintroduced earlier this month, and now backed by 242 members of Congress and 90 corporations.

“The growing support for the Equality Act by Republicans, Democrats, and Independents proves that LGBTQ equality is not a partisan issue,” said HRC Government Affairs Director David Stacy. “All Americans should have a fair chance to earn a living, provide for their families, and live their lives without fear of discrimination. We are grateful for Rep. Scott Taylor’s leadership and support for this crucially important legislation that will finally ensure LGBTQ people are protected from unjust discrimination.”

“Discrimination anywhere is an injustice,” said Rep. Scott Taylor. “I’m proud to support the Equality Act and will work to ensure that all are treated the same under the law.”

The HRC statement notes that the majority of the American people are ready for this kind of legislation to come to pass:

The overwhelming majority of Americans support full federal equality for LGBTQ people. Polling released last year by the nonpartisan Public Religion Research Institute (PRRI) found that support for a bill like the Equality Act topped 70 percent nationally, including a majority of Democrats, Republicans and Independents.

“Anytime a Republican elected official stands up for the LGBT community is a good thing, and Congressman Taylor deserves praise,” Log Cabin Republicans President Gregory T. Angelo told LGBTQ Nation. “The Equality Act remains a flawed bill that can hopefully be amended by Republicans to excise its more contentious aspects.”

Taylor previously showed his dedication to protecting LGBTQ rights by introducing The Fair and Equal Housing Act of 2017, legislation that would make it a violation of federal law to discriminate based on sexual orientation or gender identity in housing.

“I believe that there was a gap in protection there,” Taylor told CBS-affiliate WTKR on his decision to fight for a fair housing bill. “A vulnerable population shouldn’t worry about having to be protected, of course. So it was important that we got out there and got something. I understand it’s not orthodoxy for my party, if you will, but it’s the right thing to do and I don’t mind stepping out and leading.”

This apple farmer will be the next ‘religious freedom’ posterboy