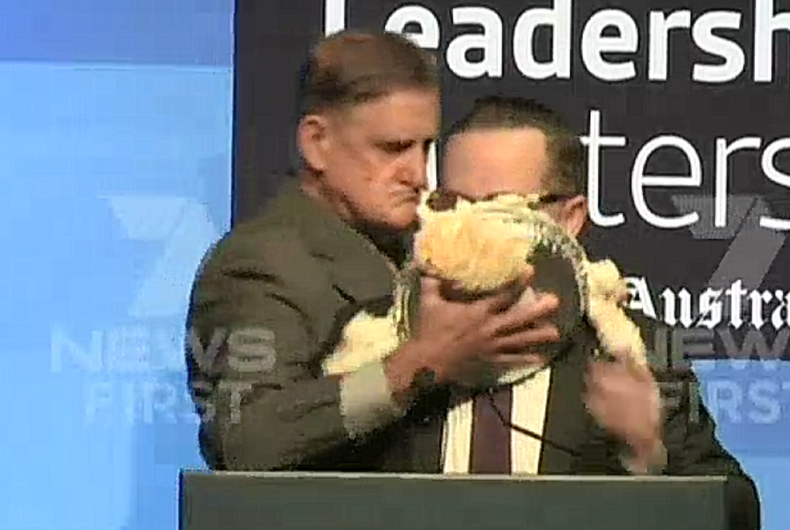 The CEO of Qantas Airlines got pied for speaking out in favor of marriage equality.

Alan Joyce was one of 20 executives of major corporations in Australia to sign an open letter in favor of marriage equality. Australia does not currently recognize marriage between two people of the same sex.

While speaking on Tuesday at a business meeting in Perth, a man named Tony Overheu approached the lectern and smashed a pie in Joyce’s face, quickly, and then walked away. Overheu, 67, was arrested and has only been charged with providing false details, but Joyce said he intend to press assault charges.

Overheu is a retired farmer and said that he was protesting marriage equality. “Alan Joyce is a very active individual in this process (towards marriage equality) and in that context he was appropriate (to target),” he said.

“I’ve never done that sort of thing, I’m a law-abiding person, but I think this is part of inevitable pushback. When the community is grumpy, figures who are overstepping the line have got to anticipate there will be pushback in some shape or form. The broad community have had a gutful.”

Joyce said that he would not be silenced by violence. “We’ll continue to speak about important social issues including indigenous reconciliation, gender diversity and marriage equality, because it’s the right thing to do,” Joyce said in a statement.

Overhue emailed Joyce but has not expressed regret for the attack. “I believe he sent me an email,” Joyce told ABC News. “I believe there has been an apology coming in but I’m not sure there’s any regret at the issue that has occurred.”

While Overhue accused Joyce of “bulldozing” “middle Australia,” 62% of Australians support the right of same-sex couples to marry.

Texas votes to allow adoption agencies to discriminate against non-Christians