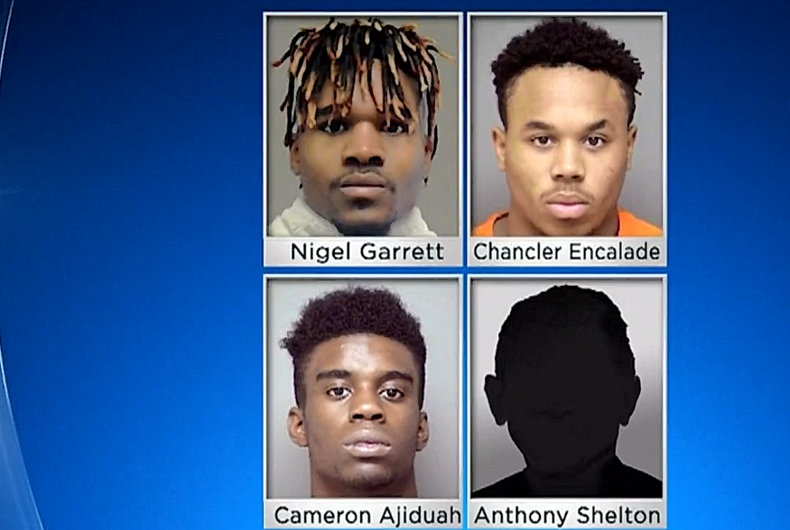 Four Dallas-area men are being indicted for involvement in a series of beatings and robberies of gay men they found on Grindr.

The men – Anthony Shelton, 19, Nigel Garrett, 21, Chancler Encalade, 20, and Cameron Ajiduah, 18 – are accused of using a profile of a gay man on Grindr to find people to let them into their homes. Once they gained entry, they would tie the victims up with tape, beat them, rob them, and shout homophobic invective. They’re even accused of stealing the victims’ cars.

According to the indictment, they used at least one firearm during the crimes.

The group is accused of committing this crime four times in January and February of this year in Aubrey, Frisco, and Plano, north of Dallas.

Texas has had a hate crimes law that includes sexual orientation (but not gender identity) since 2001. A ProPublica investigation, though, found that the law was almost never used in Texas, and this case will not change that since this is a federal grand jury.

Jeanne Rubin of the North Texas Gay and Lesbian Alliance told CBS DFW, “You can be scared as a homeowner if your neighbor is robbed, but it’s different if you feel like you’re being targeted for some reason and in this case a whole community can feel like they’re targeted.”

The grand jury indicted the men for kidnapping, carjacking, possession of a firearm, and several other charges. The hate crimes enhancement means that the defendants may be sentenced to life in prison.