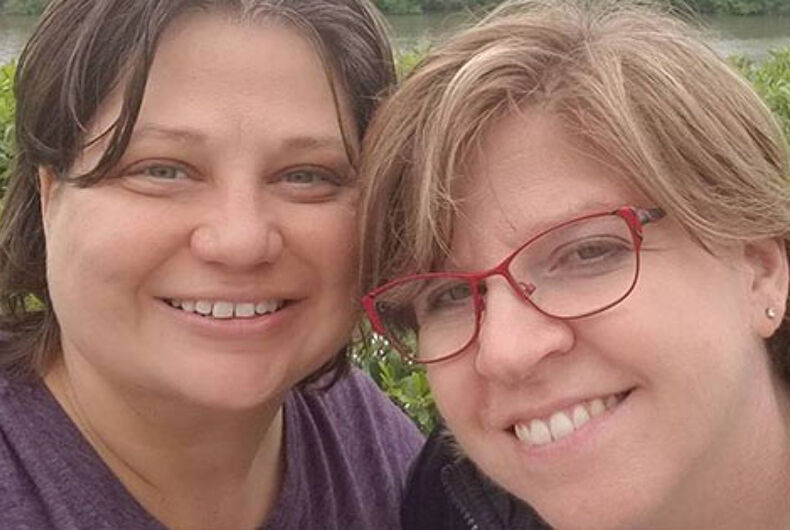 A school board investigation in Tampa Bay, Florida has cleared teacher Lora Jane Riedas-Chuchman, after a complaint that she banned Christian rosary beads and Make America Great Again hats, and discussed LGBTQ rights and related issues in her freshman math class at Riverview High School.

“I am just relieved, relaxed, for the first time in two weeks,” Riedas-Chuchman told the Tampa Bay Times Monday. She called the two-page letter from the Hillsborough County district’s Office of Professional Standards proof that she was “100 percent cleared.”

Riedas-Chuchman, who is married to chemistry teacher Valerie Chuchman and is faculty advisor for Riverview’s Gay Straight Alliance, has insisted from the beginning she did not allow rosaries, as they are considered gang symbols and not allowed in the school dress code. The same applied to the red hats favored by supporters of President Trump; Riedas-Chuchman did not allow hats of any kind as it is against the school dress code.

The teacher said she did not discuss lesbian, gay, bisexual and transgender issues in class. All 10 students in her class were interviewed by district investigators and each one backed her up on that point.

Liberty Counsel — the law firm famous for representing Kim Davis — filed the complaint that sparked the investigation and vowed to fight on. Founder Mat Staver focused his ire on one paragraph at the end of the letter, warning Riedas to “use caution whenever interacting with students.” Riedas dismissed that as standard for such letters following an investigation.

“We’ll be following up with another letter to the school,” Staver said. “We have other students who have come forth in other classes as well. We’ll likely get that letter out tomorrow, Wednesday the latest.”

Staver’s religious activist law firm was believed to have stirred up trouble by organizing protests, which reports said involved some students who wore rosaries and drew religious symbols on their math papers. One day, a small picket line formed outside the school, but according to Chuchman, they were not students, they were adults, carrying signs that criticized Riedas-Chuchman.

“The kids’ response to the protesters was really amazing,” she told the paper. “Not just the kids, but the teachers, parents, the PTA and the school. I had a couple of kids from four years ago come and give me a hug, saying ‘I’ll miss you’ and ‘thank you.'”