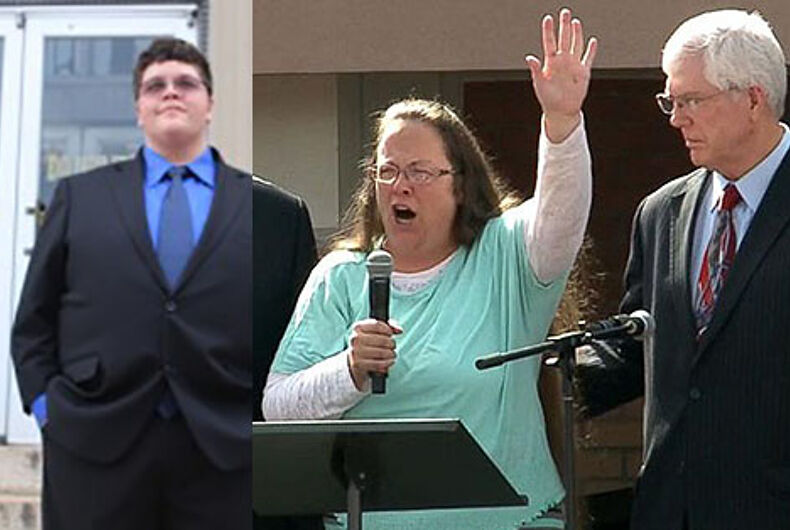 A new opponent has entered the arena to oppose Gavin Grimm in his fight against the Gloucester, Virginia School Board. The transgender student is challenging its policy prohibiting him from continuing to use the boys’ bathroom as he did without incident for months. And now the board is getting help from the religious right-wing law firm labeled a hate group by the Southern Poverty Law Center, Liberty Counsel, founded by the lawyer for anti-LGBT Kentucky clerk Kim Davis, Mat Staver.

In Monday’s amicus briefing, known colloquially as a “friend of the court” filing, Liberty Counsel pulls out every anti-transgender argument ever made in an attempt to not only discredit Grimm’s claim that he is being discriminated against but in a blatant attempt to prove there is no such thing as being transgender.

Take for example its wording on Title IX, the federal statute that prohibits discrimination based on sex, which has been the centerpoint of a legal tug of war between opponents of transgender rights and its advocates: “Expanding Title IX to include ‘gender identity’ would place children at risk by providing greater access to children if they simply masquerade as the opposite sex,” Liberty Counsel claims. “The dangerous experimental worldview underlying the attempt to expand the definition of ‘sex’ under Title IX should be rejected by this Court.”

The lawyers also attempt to cite science in their defense, claiming “there is no scientific basis for a claim that individuals have a separate ‘gender identity’ that can differ from their biological sex.”

Their evidence is the work of debunked and discredited epidemiologist Dr. Lawrence Mayer and psychiatrist Dr. Paul McHugh, who the brief calls “the former head of the Johns Hopkins sex change clinic.” His biased claims are so maligned that it cost Johns Hopkins a good score on the Human Rights Campaign’s Healthcare Equality Index. HRC has targeted McHugh to make it clear his so-called research is anti-trans religious rhetoric passed off as scientific fact.

Perhaps one of the best responses to McHugh, Mayer and the other claims was a Bilerico post by the highly respected writer and advocate Brynn Tannehill, who knocked down each and everyone of the lies repeated in Liberty Counsel’s filing.

The brief, signed by Staver and his wife as well as a Virginia lawyer working for Liberty Counsel, goes on to make several more baseless claims, and concludes that “discrimination based on ‘gender identity’ is wholly unsupported by science and based on fraudulent research built on records of criminal serial child sexual abuse. It sanctions procedures that are inimical to the health and well-being of children and safe learning environments.”

Grimm’s case was set to be heard by the Supreme Court in March but the high court sent the case back to the district court following the Trump administration’s decision to withdraw the federal guidance on Title IX. In Grimm’s corner, the American Civil Liberties Union has amicus briefs of its own, including the National Women’s Law Center et al. School Administrators, the World Professional Association for Transgender Health, Obama-era officials at the U.S. Department of Justice  as well as Gender Benders, GLSEN, et al.

A prior brief filed with the Supreme Court by the Transgender Legal Defense and Education Fund featured 101 signatories, a diverse group of transgender Americans, who “are everyday Americans with hopes, dreams, talents, successes and the desire to live a life fully realized. They seek basic freedom, respect and dignity so that they may continue to be positive participants in their communities.” They urged the Court “not to accept an interpretation of Title IX that would reduce them and all transgender individuals to second-class citizens, but instead to promote the valuable contributions they make to American society.”