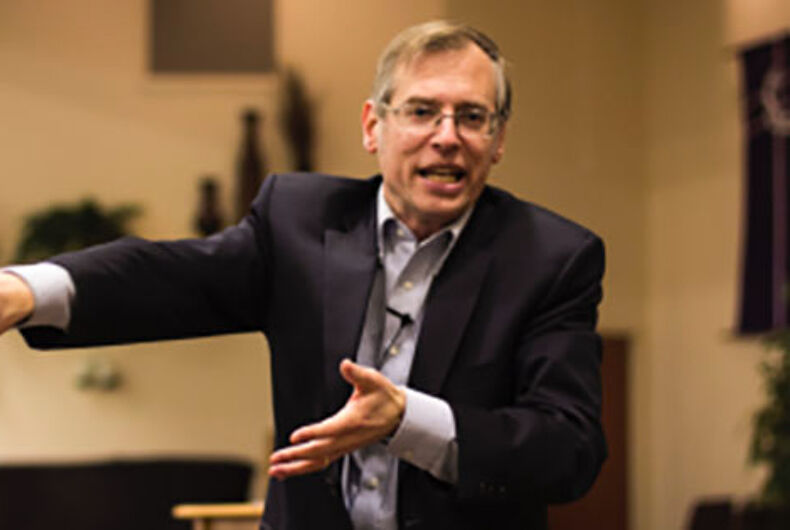 The Colorado pastor and broadcaster who believes gays should be sentenced to death has identified a new co-conspirator in the queer commie agenda: public schools.

It’s a perfect pairing for Kevin Swanson who, in addition to being vehemently anti-LGBTQ, is a vocal advocate for home schooling. It’s not clear where Swanson, who homeschools his children and was homeschooled himself, gets his ideas about public schools. But he apparently believes that the goal of public education is not to educate children, but rather to turn kids into transgender communists.

“The state has an agenda with your children,” he warned on his “Generations” radio show this week, conceding that his claim might sound a little extreme. “The goals of the educational program for your kids in the public schools, the goals of the world for your children is that your kids be transgendered and communist by 20 years of age.”

According to Right Wing Watch, Swanson went on to urge parents to “get serious about it” and “bring a different vision into the education of your children.”

Of course, Swanson’s children would never dream of becoming transgender communists. However, if one of them turned out to be gay and had the audacity to invite their father to the wedding, he would stage a smelly protest.

“I’d sit in cow manure and I’d spread it all over my body,” he said while speaking at the 2015 National Religious Liberties Conference. “That’s what I would do and I’m not kidding! I’m not laughing!”

Who else is behind this nefarious agenda in Swanson’s worldview?

Democrats: “[The] Democratic vision in a nutshell is to make sure everybody is committing homosexual acts and they’re high on drugs, and then they vote for Democrats to increase the size of government and provide pretend security for the people high on drugs.”

Affirming religious leaders: “This is horrible; this is the shepherds leading the sheep to death.”

Boy Scouts of America: “So that’s what the Boy Scouts are doing, they are trying to add abomination on abomination, effectively going into God’s word, trying to find the thing that God really, really, really hates the most. The sins listed in the Bible, going through the lists of sins in the Bible, finding the very worst ones and creating merit badges for them is where the Boy Scouts are headed.”

Girl Scouts: “…an organization that promotes lesbianism and abortion…”

Katy Perry’s parents: “As a pastor, if your children turn out to be sinners, if it turns out they abandoned the faith while they are in the household, accused of riot and unruly debauchery, et cetera, within the household, you need to resign as a pastor.”

Hillary Clinton: “Why wouldn’t Hillary Clinton get full rein upon this nation to continue the destructive pattern, destroy the social fabric of the nation — the family, of course — so that…tremendous majorities of American kids are taken down the track towards homosexuality, towards the destruction of sexuality with pornography habits, illegitimate divorce, the shack-up rates being 30 times what they were in 1970 and so forth?”

Highlights Magazine: “So now, here’s Highlights magazine, an American kids’ magazine promoting homosexuality amongst kids, and now ISIS is teaching kids how to kill people. Now, I got to thinking: Which sin is worse? Homosexuality or murder? Which is worse? Are we really that much better than ISIS?”