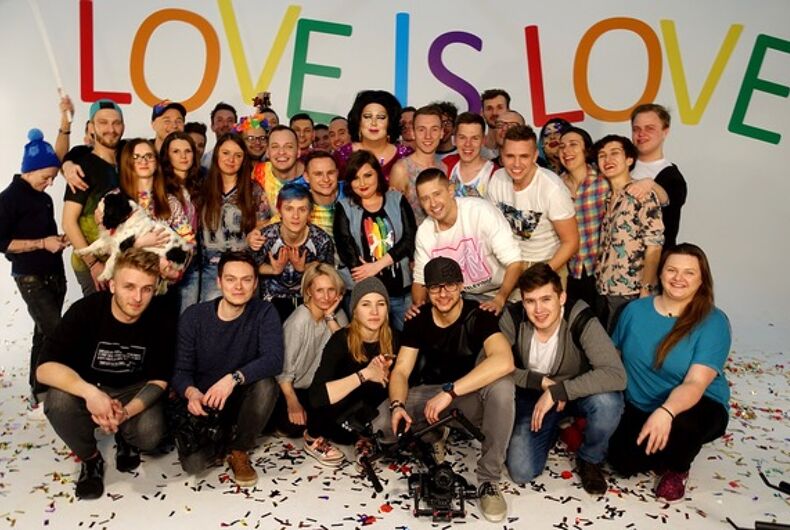 As the United States approaches two years with marriage equality — and as LGBTQ rights face daily assaults from state and federal lawmakers — it can be easy to take for granted what we have. But in other parts of the world, people are still fighting for the rights we’ve won.

Take Poland. It’s the largest country in Europe where same-sex couples don’t have the right to marry.

Polish couple Jakub Kwiecinski and David Mycek are using their latest fan video to call attention to the fight for LGBTQ equality in Poland. It’s a struggle that seems to be getting harder, not easier, they explain:

Recently the current government harnesses the General Prosecutor’s Office in order to intimidate the same-sex couples and therefore discourage them from getting married abroad. Polish president claims also that in accordance with the Polish Constitution, marriages and unions between same-sex couples will never be possible in Poland.

The vloggers/activists recently won a battle to get married in Portugal this June thanks to their haters, though same-sex marriage remains illegal in their home country of Poland. Jakub and David are trying to raise awareness about the lack of equality in Polish society through a project called #PolandWakeUp.

Featuring 50 of Poland’s most well-known LGBTQ, the video pays tribute to queer icon George Michael with a medley of “Faith,” “Wake Me Up,” “Too Funky,” and “Freedom! ’90.”

“We felt a huge loss last year when we found out that he passed away. He was the greatest gay artist of our time, a real icon,” Jakub explained. “But also with his all strengths and weaknesses he was so much real. He shared these emotions by his songs. We grew up with it, we fell in love with it, we had first sex with it and now we can fight with it!”

The video is the latest in a series that has included covers of Roxette’s “Some Other Summer” and RedOne’s “Don’t You Need Somebody.” Each video has been a DIY effort and contributed to LGBTQ visibility in Poland. Each video has also come with hate mail, harassment, and death threats. But the couple is undeterred.

“We just did to say it loud and clear – we are not gonna let go and we are not afraid,” Jakub said. “When we sang ‘Freedom’ at the end we really felt a power that we can change the world. Not today, not tomorrow but one day it will happen.”

George Michael would have been proud. Watch the video below.