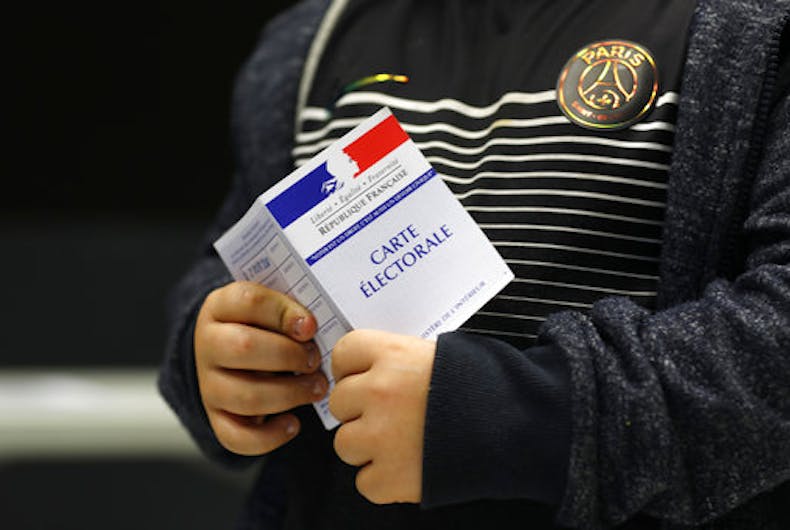 A child holds his mother's voting card Sunday, May 7, 2017 in Anthony, outside Paris. French voters decided Sunday whether to back pro-business independent Emmanuel Macron or far-right populist Marine Le Pen as their next president, casting ballots in an unusually tense and important presidential election that also could decide Europe's future. Photo: AP Photo/Buhran Ozbiblici

French voters decide today whether to back pro-business independent Emmanuel Macron or far-right populist Marine Le Pen as their next president, casting ballots in an unusually tense and important presidential election that also could decide Europe’s future.

With Macron the pollsters’ favorite, voting stations opened across mainland France at 8 a.m. (0600 GMT) under the watch of 50,000 security forces guarding against extremist attacks. A security scare caused by a suspicious bag prompted the brief evacuation of the Louvre museum courtyard where Macron plans to celebrate election night.

France’s Interior Ministry said voter turnout at midday was running slightly lower than during the last presidential runoff in 2012. The ministry said 28 percent of eligible voters had cast ballots, compared with a half-day tally of 31 percent five years ago.

Commentators think a low turnout would benefit Le Pen, whose supporters are seen as more committed and therefore more likely to show up to vote.

Macron voted in the seaside resort of Le Touquet in northern France alongside his wife, Brigitte Macron. Le Pen cast her ballot just a hundred kilometers away in Henin-Beaumont, a small town controlled by her National Front party.

Macron, 39, a former Socialist economy minister and one-time banker who ran as an independent, was all smiles and petted a black dog as he stepped out of his vacation home. For security reasons, he was driven to his polling station nearby.

Le Pen, 48, was able to vote without any incident after feminist activists were briefly detained a couple of hours earlier Sunday for hanging a big anti-Le Pen banner from a church in the northern town.

Meanwhile, police and soldiers worked to secure the symbolic Paris venues where the next president will celebrate victory.

The grand internal courtyard of the renowned palace-turned-museum Macron picked for his celebration party reopened after several hundred journalists preparing for the election event had to leave because of the security alert over the suspicious bag.

The museum itself was not evacuated, and tourists continued entering and leaving the site. The Louvre already was being heavily guarded after an extremist attacker targeted soldiers near the museum during the presidential campaign. Paris police said the evacuation was a “precautionary measure.”

If Le Pen wins, she plans to celebrate at the Chalet du Lac in the Bois de Vincennes, a vast park on Paris’ eastern edge.

The most closely watched and unpredictable French presidential campaign in recent memory ended with a hacking attack and document leak targeting Macron on Friday night. France’s government cybersecurity agency, ANSSI, is investigating the hack, which Macron’s team says was aimed at destabilizing the vote.

France’s election campaign commission said Saturday that “a significant amount of data” — and some fake information — was leaked on social networks following the hacking attack on Macron. The leaked documents appeared largely mundane, and the perpetrators remain unknown.

The fate of the European Union may hang in the balance as France’s 47 million voters decide whether to risk handing the presidency to Le Pen, who dreams of quitting the bloc and its common currency, or to play it safer with Macron, an unabashed pro-European who wants to strengthen the EU.

Global financial markets and France’s neighbors are watching carefully. A “Frexit” would be far more devastating than Britain’s departure, since France is the second-biggest economy to use the euro. The country also is a central pillar of the EU and its mission of keeping post-war peace via trade and open borders.

The vote will help gauge the strength of global populism after the victories last year of a referendum to take Britain out of the EU and Donald Trump’s U.S. presidential campaign. In France, it is a test of whether voters are ready to overlook the racist and anti-Semitic past of Le Pen’s National Front party.

Le Pen has broadened the party’s appeal by tapping into — and fueling — anger at globalization and fears associated with immigration and Islamic extremism. Macron has argued that France must rethink its labor laws to better compete globally and appealed for unity and tolerance that Le Pen called naive.

Either candidate would lead France into uncharted territory, since neither comes from the mainstream parties that dominate parliament and have run the country for decades. The winner will have to try to build a parliamentary majority in elections next month to make major changes.___