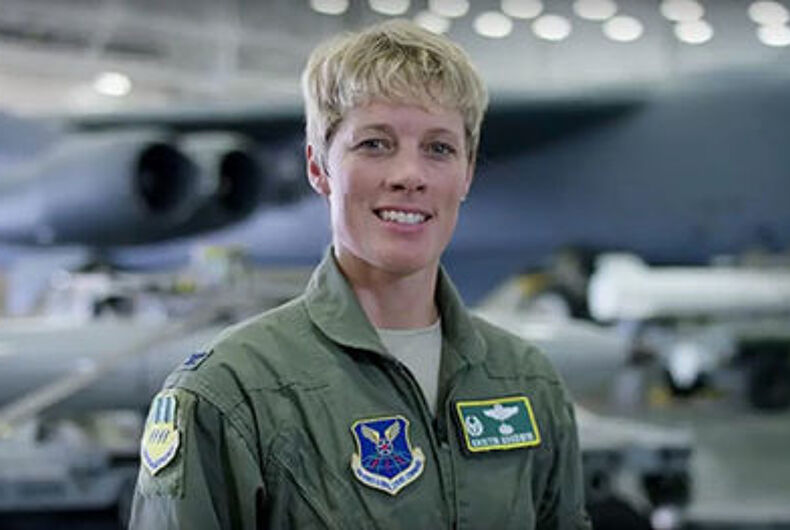 Kristin Goodwin has been promoted and it is driving anti-LGBTQ activists crazy. Photo: YouTube

Family Research Council’s Peter Sprigg wants the Senate to probe Kristin Goodwin, recently promoted to brigadier general, and commandant of cadets at the U.S. Air Force Academy, about any incidents of “homosexual conduct” she may have engaged in prior to the repeal of Don’t Ask, Don’t Tell (DADT).

As previously reported, Goodwin’s nomination is upsetting anti-LGBTQ groups, as she is an out and proud lesbian.

Sprigg points to another post by God and Country, stating that since Goodwin entered the into the Air Force with the Academy Class of 1993, and DADT wasn’t instated until the following year, she would have had to answer a question about homosexuality. Anyone admitting to such conduct would have been denied entry, it continued.

“How was Col Goodwin — an open homosexual — able to enter the Air Force?” the post asked, suggesting she could have acted against the Air Force Honor Code, which prohibits lying.

Sprigg also sees Goodwin as a possible threat to “religious liberty,” without citing any evidence in her past that suggests this would be an issue, writing:

Christians, however, may have legitimate concerns about what Goodwin’s appointment will mean for the future of religious liberty at the Academy. Since the repeal of the 1993 law against homosexuality in the military, the Air Force has seen incidents in which airmen have been punished for espousing the biblical view of human sexuality and marriage. Senior Master Sergeant Phillip Monk was relieved of duty by a commander who identifies as homosexual at Lackland Air Force Base for defending marriage as the union of one man and one woman (although after the intervention of pro-family groups, he received a commendation instead).

At the Air Force Academy itself, a cadet was recently ordered to erase a Bible verse written on a whiteboard that was provided to cadets in their dorms to write personal messages. Although Weinstein insisted that the words of the New Testament created a “hostile environment” for non-Christians, the flap merely encouraged more cadets to exercise their freedom of speech and religion by posting Bible verses on the whiteboards, and brought members of Congress down on the Academy for engaging in “viewpoint discrimination.” Can we expect more such discrimination under Goodwin’s leadership?

Sprigg admits we are in a post DADT world and Goodwin has said she did not become aware of her sexual orientation until well after the policy went into effect.

Still, he seems committed to dragging Goodwin through an unnecessary probing into her sexual history despite the fact that there doesn’t appear to be any “there” there.