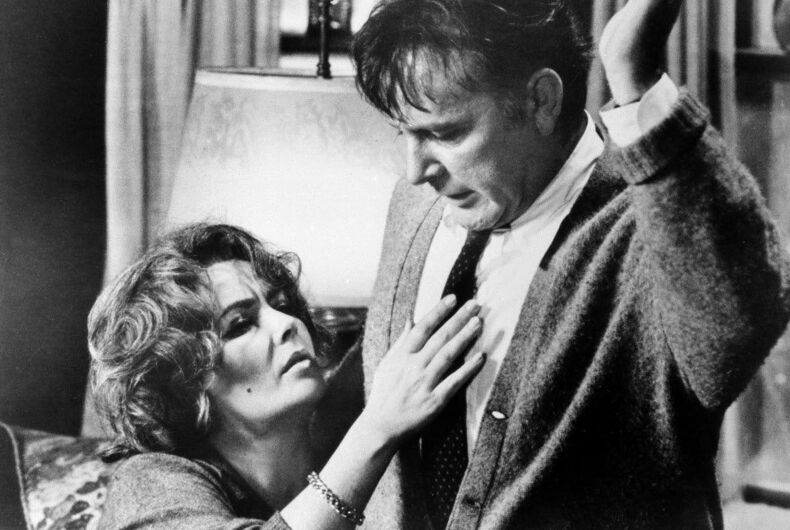 Elizabeth Taylor plays Martha and Richard Burton is George in a scene from the film, "Who's Afraid of Virginia Woolf?"Photo: Associated Press

The Edward Albee Estate has pulled the rights from a Portland, Oregon theater company after a black actor was cast in the role of “Nick” in a production of “Who’s Afraid of Virginia Woolf?”

Michael Streeter, the director of the production that was to be put on by The Complete Works Project, posted to Facebook on Wednesday that the Edward Albee Estate had demanded he fire the black actor and replace him with a white one. When he refused, he said they withdrew the rights, saying he was “furious and dumbfounded” by the situation.

As OnStage notes, this brings up the issue of employment discrimination, as the production was a professional one and the actor was “essentially… threatened to be fired because of his race.” The magazine also notes that Albee was known to be particular in having the details of his plays maintained, even reportedly once demanding to know the heights of all the women to appear in a production of Three Tall Women.

A press agent with the Albee Estate, in a letter to Streeter, accused the director of advertising the play before getting permission to produce it, and of hiring actors before approval as required.

“Insofar as the Albee Estate had not approved the actor in question, you were in violation of the agreement by hiring him in the first place,” the letter reads. “The decision to ‘fire’ him was yours and yours alone by virtue of your own misstep.”

Mr. Albee wrote Nick as a Caucasian character, whose blonde hair and blue eyes are remarked on frequently in the play, even alluding to Nick’s likeness as that of an Aryan of Nazi racial ideology. Furthermore, Mr. Albee himself said on numerous occasions when approached with requests for non-traditional casting in productions of VIRGINIA WOOLF? that a mixed-race marriage between a Caucasian and an African-American would not have gone unacknowledged in conversations in that time and place and under the  circumstances in which the play is expressly set by textual references in the 1960’s.

For his part, Streeter claims the poster was not an advertisement for the show, but simply a casting notice. He also said he had no choice but to cast the show when he did.

“The Edward Albee estate requires a venue be in place and the show be cast before they will grant the rights. In the process, I cast the show,” he said in an email to OnStage, which he has since posted to Facebook. “I’m not sure how I’m supposed to present the Albee Estate with the cast of the show unless I’ve cast it.”

He added that the casting of a black actor in the role was intentional.

“The character is an up and comer. He is ambitious and tolerates a lot of abuse in order to get ahead. I see this as emblematic of African Americans in 1962, the time the play was written.”

He said that while he understands the arguments for casting a white actor in the role, he feels the advantages to the casting of a person of color as “Nick” would add more than it subtracts.

Streeter also challenges the notion that the couple has to always be white, as the Albee Estate claimed in the memo.

“The memo is also mistaken in that there has been at least one past production with a black cast member [Andrea Frye as "Martha] and an interracial couple as characters. This was in 2002 at the Oregon Shakespeare Festival which was during Albee’s lifetime and presumably with his approval,” Streeter wrote.

Trans athlete shares journey with side by side prom pictures, goes viral