As my colleague Graham Gremore wrote in Queerty, “Twitter troll @AntMcfc_ decided it would be an appropriate time to crack a homophobic ‘joke’ about the whole thing:” 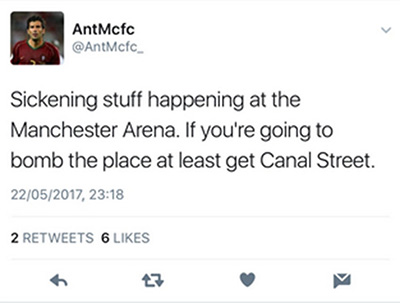 When this particular troll was challenged on his homophobia, he merely doubled down.

As of press time it has not taken action against self-described “writer” David Leavitt, who tweeted

MULTIPLE CONFIRMED FATALITIES at Manchester Arena. The last time I listened to Ariana Grande I almost died too.

If that were not enough, Leavitt — who boasts in his Twitter profile that he writes for CBS News, AXS, Yahoo and The Examiner — followed up with:

Honestly, for over a year I thought an Ariana Grande was something you ordered at Starbucks.

He must have felt some pang of guilt, or something, as reactions poured in. So he tweeted: “Too soon?”

Children were dying and Leavitt was working on his standup routine. His next act might require a revision to his resume, reported the New York Daily News.

“This person is not employed by AXS. We don’t endorse this despicable comment,” AXS tweeted. CBS also confirmed that Leavitt does not work for the company.

“@David_Leavitt does not work for @CBSNews,” the company tweeted.

The CBS affiliate in Boston deleted articles from its WBZ-TV website.

“David Leavitt is not a WBZ employee. His abhorrent comments in no way represent the views of our station,” WBZ-TV tweeted.

And a Yahoo! spokesperson told the newspaper that Leavitt has not written for the company since 2014.

After being bombarded by angry tweets, Leavitt himself took action, deleting the offending original tweet, and posting an apology.