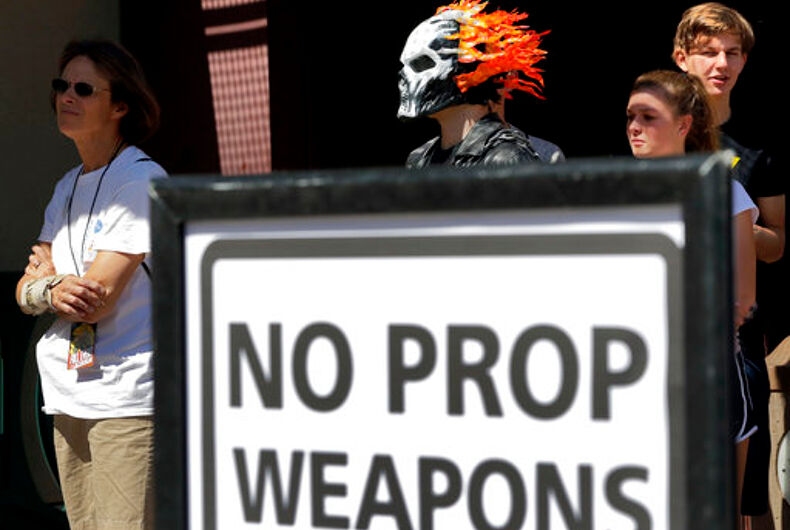 Fans line up to enter Comicon at the Phoenix Convention Center, Friday, May 26, 2017, in Phoenix. Comic book and science fiction fans showing up at the Phoenix Comicon festival will have all prop weapons - including swords, sabers and fake guns - confiscated after a man showed up at the event with real guns and caused a security scare. Photo: AP Photo/Matt York

Jack Young showed up at Phoenix Comicon on Friday dressed as the villain from Sleeping Beauty, complete with black horns, large feathery wings and green paint.

He also brought a black walking stick. It was no longer allowed at Comicon.

Police said the man had threatened to harm a performer and posted online threats against police officers, convinced he was the alter-ego of a Marvel comic book character called the Punisher.

In response to the scare, police added extra security and banned all costume prop weapons, including swords, sabers and fake guns.

Comicon fans were not amused.

“Cosplayers spend a lot of time working on props and costumes and putting things together,” Young said.

Unique characters with distinct weapons especially rely on their props to be identifiable, he said. “Being told not to bring props definitely messes with things,” Young said.

Young was among many other comic book, science fiction and animation fans frustrated and upset over the sudden ban on fake weapons and the added security and heavy delays before entering the event.

Massive crowds of attendees wearing superhero, notorious villain and anime costumes waited up to hours in long zigzagging lines outside the Phoenix Convention Center, waiting to approach the new security screenings on the second day of the city’s four-day Comicon event.

Many fervently complained that the terms of the ban were not clear on whether other props wouldn’t be permitted.

Officials said the suspect in Thursday’s incident at Comicon, Mathew Enrique Nava Sterling, appears to have mental issues. He told detectives he is a crime-fighting comic book character and planned to shoot bad police officers.

Police said in a probable-cause statement released Friday that officers took Sterling into custody at the Phoenix Convention Center after someone contacted Hawthorne, California, police to report that he was posting threats on Facebook about killing officers at the Comicon event.

Sterling did not have an attorney present during his initial court appearance Friday. He spoke only briefly, agreeing when a judge told him it might not be in his interest to comment.

Christina Hanisch said Thursday was extremely relaxed in terms of security and that likely allowed for Sterling to get through. But she called the added measures an overreaction and overkill.

Hanisch, wearing a white wig with one blue and one pink pigtail and a shirt complimenting her costume as supervillain Harley Quinn of the Suicide Squad, said she thinks the intensified screenings will negatively affect the convention.

“This is wrong. They’re going to lose so many people,” Hanisch said. “Just watching Facebook posts last night, it was up to like 4,000 comments — 99 percent of them negative of people saying ‘I want my money back, I spent all year working on a costume’. It’s just disappointing. It’s rotten.”

Others said the ban was unfair because not only are weapons essential in completing costumes, they can be extremely costly to build or buy.

Kane Cheshier came to the event with dyed bright green hair and his face painted white with a red stretched smile to match a purple suit and green vest depicting the Joker.

“Some people have invested thousands of dollars into their costumes that need weapons to complete the look,” Cheshier said. “If they can’t use the weapon, you’re just telling us we just wasted all this money for nothing — kind of makes you want to punch someone. It really makes you mad.”