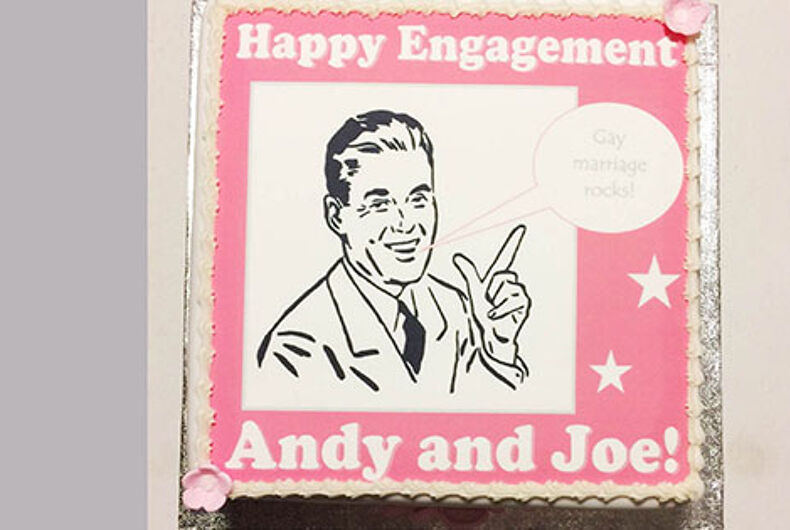 One thing you can say about Ashers Bakery in Newtownabbey, Northern Ireland: they’re consistent.

In spite of a string of legal defeats that chastised the Christian-owned shop for refusing orders for pro-gay cakes, Ashers bakery has rejected yet another cake order that celebrates same-sex marriage.

Grainne McCann went online to order and pay for a cake with the message “Gay marriage rocks” to celebrate the engagement of her friends, Joe Palmer and Andy Wong. But the next day, the London native said she received bad news, without explanation, reported the Belfast Telegraph.

“We were thrilled when Ashers accepted our online order, and full payment of £23.40 plus £20 P&P,” McCann said, “but the next day they sent the cancellation note and a refund.”

“My gut instinct,” she told the paper, “told me the cake was refused because it celebrated gay marriage.”

Last December, Ashers Baking Company was found guilty of discrimination for refusing to bake a cake that said “Support Gay Marriage” and ordered them to pay £500 to the customer who sought the cake, local gay rights activist Gareth Lee. He had requested the cake for an International Day Against Homophobia event in 2014.

In an earlier ruling, Declan noted: “The fact that a baker provides a cake for a particular team or portrays witches on a Halloween cake does not indicate any support for either.”

Lee’s legal action was supported by the Equality Commission for Northern Ireland.

McCann decided that based on Lee’s case and her own experience, she would order a christening cake from Ashers for her goddaughter Leila. No problems this time, she told the paper.

“A woman from the company even offered to drive it to its destination in Dublin as a favor because she was going that way,” said McCann. “This was terribly kind, but I felt angry and sad that Ashers’ attitude to gay people is so different.”

McCann turned to a London baker for the couple’s engagement party.

“Obviously, if someone wanted a racist cake for an English Defense League meeting, we’d say no,” said Londoncakes.com owner Graham Brooks. “But I don’t have the right to judge others’ views unless they’re illegal.”

This drunken lawbreaker is not Hillary Clinton