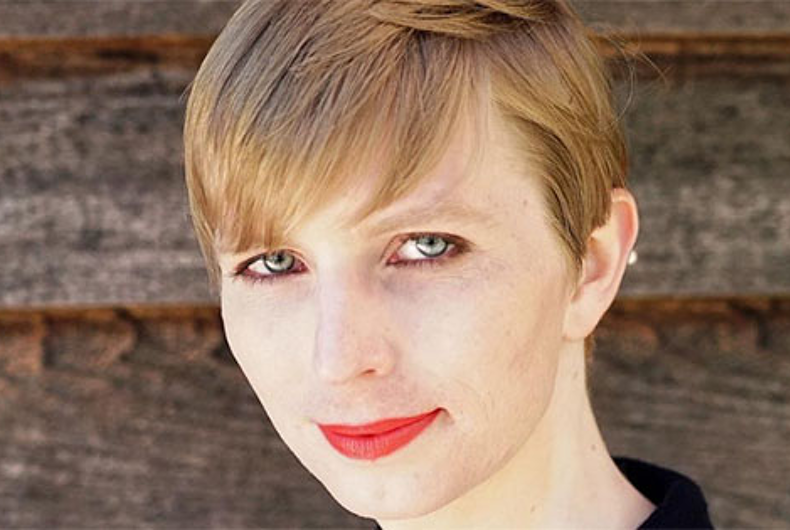 With those words, Chelsea Manning revealed her true and authentic self, in a caption to her first Instagram post as a free woman. Manning was released Wednesday from Fort Leavenworth, Kansas, as a result of the bulk of her 35-year-sentence being commuted by President Obama.

What a difference freedom makes. Manning appears with mascara, lipstick, and her short blonde natural hair styled in a very femme fashion.

And as proof perhaps that two years and three months of hormone replacement therapy has helped in her medical transition, Manning posed for this photo out of uniform in a stylish top that is open to her midriff, revealing just a glimpse of her right breast.

Manning added the hashtag, #HelloWorld — and in just the first hour since she posted, already her photo has 3,666 likes.

Until now, the only images the world has seen of the convicted Wikileaker were pre-transition photos of her wearing her military uniform, her hair in a traditional male crew cut, a grainy selfie of her wearing an ill-fitting wig and an artist’s sketch of how she imagined she’d look if she ever got the chance to be free.

Manning started the Instagram account upon her release Wednesday, with the debut post captioned, “First steps of freedom!! #chelseaisfree” accompanying a photo she took of her feet… wearing non-prison issue Converse sneakers.

Then, her first meal after seven years of jailhouse food: pepperoni pizza.

And Manning was not alone. She posted one last photo Wednesday evening revealing she and three friends celebrated her release with a bottle of Dom Perignon champagne. The caption reads: “Here’s to freedom and a new beginning. #ChelseaIsFree”

Here's to freedom and a new beginning. . . #ChelseaIsFree

It should be noted that many of the nearly 500 comments to her post are transphobic, hate-filled messages that must be a shock to someone who’s been unable to see her own social media since 2010.

Let us know what you think of her new look in the comments.

Canada will apologize to LGBT people discriminated against by government