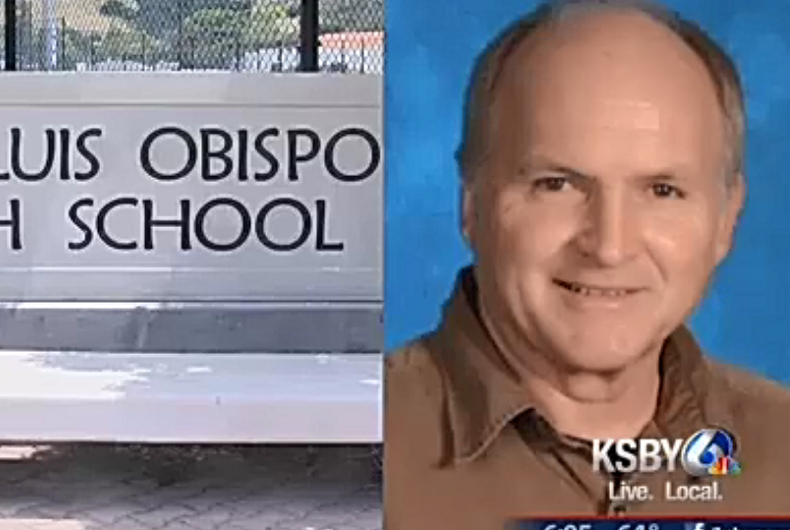 A California special education teacher has resigned amid controversy stemming from a homophobic letter he wrote that was published by the school newspaper.

San Luis Obispo High School teacher Michael Stack wrote a letter to the school newspaper Expressions, to respond to an LGBTQ-focused issue of that paper. In his letter, he quoted a passage from the Bible that mentions men and women who have sex with the same sex and says they “deserve to die.”

He faced an enormous backlash from the community, including condemnation from the mayor and a 40-person protest outside the high school. On Thursday, instead of coming to work, he resigned.

“God knows my heart, and my students know my actions, but the community apparently wants me out, so I hereby grant them their desires and immediately resign my position as teacher at SLCUSD,” Stack wrote in an email to announce his resignation.

He claimed that many students agreed with him, including one who he said stomped on the paper “in disgust,” but that they were all keeping silent so that they wouldn’t face the same backlash he did. Stack also complained about “media bias, slander and defamation of character” because a local TV news report did not include a quote from him.

The controversy started when Expressions published its LGBTQ-focused May edition that featured two girls kissing on the cover and three articles about LGBTQ people.

In response to that issue, Stack wrote a letter to the editor that was published on Expressions‘s website on Tuesday.

In the letter, he claims that while he loves the students and teachers at the school, “I love God more, so in obedience to Him, I am writing this letter.” He went on to say that the Bible has been “100%” accurate regarding “predictions over thousands of years.”

He then quotes Romans 1:16-32 in its entirety. The passage includes several sentences about men and women who have sex with the same sex. “Even the women turned against the natural way to have sex and instead indulged in sex with each other. And the men, instead of having normal sexual relations with women, burned with lust for each other. Men did shameful things with other men, and as a result of this sin, they suffered within themselves the penalty they deserved.”

After listing several other sins, that passage says, “They know God’s justice requires that those who do these things deserve to die, yet they do them anyway.”

Stack ended the letter with the hope that reading the passage will “put you back on the right path.”

The backlash the letter generated was intense. Amber Ernst, the co-president of San Luis Obispo High School’s GSA, said, “For others still trying to find themselves, I feel like something like this will be really damaging. It’s heartbreaking for them to see a teacher essentially say they’re going to hell.”

Ernst also said that several weeks before the letter, Stack asked her if she would have a conversation with him about religion outside of class, but she said no. She says she did not know the extent of his views at that point, though.

On Wednesday, the day after the letter was published, Ernst wore a T-shirt to school with Bible passages about love and acceptance written on it.

The administration stood by the teacher, citing free speech. “A bedrock principle underlying the First Amendment is that the government may not prohibit the expression of an idea simply because society finds the idea offensive or disagreeable,” Superintendent Eric Prater and Principal Leslie O’Connor said in a joint statement.

The statement also said that their position was that Stack’s letter did not constitute a direct threat, so it is still protected under the First Amendment.

Heidi Harmon, the mayor of San Luis Obispo, condemned the letter and encouraged people to complain to the school board. On Thursday, 40 people protested outside the high school.

Assistant superintendent for the school district Ryan Pinkerton said that they received a death threat on Thursday against Stack. “Someone called in around 9 a.m. and made a statement basically threatening Mr. Stack. Something like I am going to kill Mr. Stack,” Pinkerton told Cal Coast News.

District officials say they have not been in contact with Stack and that they even sent two people to his last known address but he wasn’t there.

Stack resigned on Thursday, four weeks before the end of the school year. He was a probationary teacher and said that he was not expecting to be asked to come back next year because administrators hated everything about him, including his voice, his presence, and his penmanship. The administration said, though, that this letter was the first time they had any concerns about him.

His students will have a substitute teacher for the rest of the year.