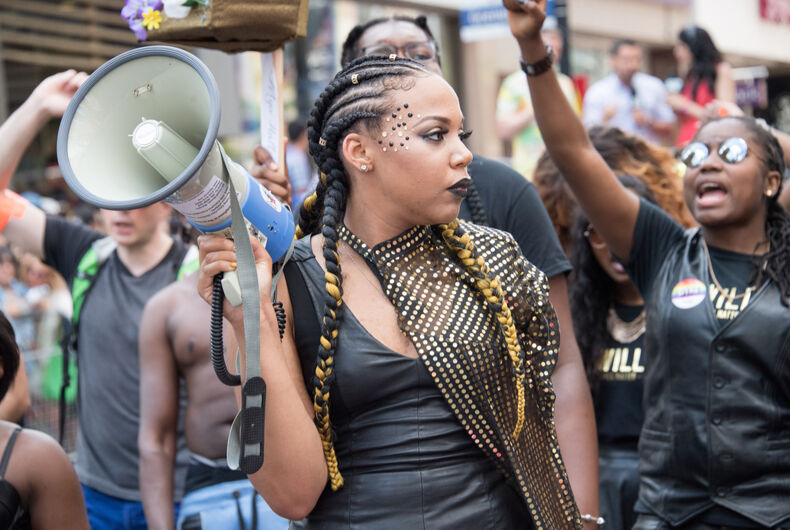 Pride parades will take place all over the country next month.

As we all rev up for this year’s festivities, so, too, the fault lines of race, gender identity, and class will emerge. In addition to Gay Pride events, there will be a segment of our lesbian, gay, bisexual, transgender and queer (LGBTQ) population attending Black Gay Pride and Latino Gay Pride events.

Pride is about the varied expressions of the life, gifts, and talents of the entire (LGBTQ) community. But the divisions in our community during Pride Month also show us something troubling and broken within ourselves.

So, as we hit the streets all month going to various celebrations, let’s ask who’s missing from these Pride festivities and why?

For example, Black Pride dances to a different beat.

Cultural acceptance was just one of a few things LGBTQs of African descent did not experience from larger Pride events. In these predominately white events, many African American LGBTQ revelers experienced social exclusion and political invisibility. From decades of Pride events where many LGBTQ people of African decent tried to be included and weren’t, Black Gay Pride was born.

Even as the larger LGBTQ community has begun to touch the fringes of mainstream society in the four decades since Stonewall, communities of color — straight and gay — have not come close. Quite the reverse. For example, the HIV/AIDs health issue that was once an entire LGBTQ community problem is now predominately a black and Latino one.

Another example: the white LGBTQ ghettos have developed and thrived safely in neighborhoods throughout the country. But with the income disparity between black and white LGBTQ communities, most LGBTQ people of African descent live in their black neighborhoods. And with homophobia such as it is in the black community, we cannot carve out a black queer ghetto within our existing neighborhoods and realistically expect to be safe.

The themes and focus of Black Pride events are different from the larger Pride events. Black Pride focuses on issues not solely pertaining to its LGBTQ population but rather on social, economic, and health issues impacting the entire black community. For example, where the primary focus and themes in white Prides has been on marriage equality, Black Pride events have had to focus as well on HIV/AIDS, unemployment, gang violence, and LGBTQ youth homelessness, to name a few.

But many Black and Latino LGBTQs argue that the gulf between whites and themselves is also about how the dominant queer community rewrote and continues to control the history of Stonewall. The Stonewall Riot of June 27-29, 1969, in Greenwich Village started on the backs of working-class African-American and Latino queers who patronized that bar. Those brown and black LGBTQ people are not only absent from the photos of that night, but are also bleached from its written history.

Because of the bleaching of the Stonewall Riots, the beginnings of LGBTQ movement post-Stonewall is an appropriation of a black, brown, trans and queer liberation narrative. And it is the deliberate visible absence of these African American, Latino and API LGBTQ people that makes it harder, if not near impossible for LGBTQ communities to build trusted coalitions with white LGBTQ communities.

Views on Pride are mixed — and not just along lines of race, class, and gender identity. For many, Pride represents a bone of contention. Once many thought the celebration was too political and had lost its vision of what it means for people to just have a good time. But others now think of it as a weekend bacchanalia of drugs, alcohol, and unprotected sex, desecrating the memorial of the Stonewall Riots and the chance to make a political statement.

At its core, Pride events are an invitation for community.

They should highlight the multicultural aspect of joy and celebration that symbolizes not only our uniqueness as individuals and communities, but also affirms our varied expressions of LGBTQ life in America.

But as long as LGBTQ communities and cultures of color continue to be absent each June, Pride month is an event to not be proud of.

—
This article was first published on Bilerico in 2010.