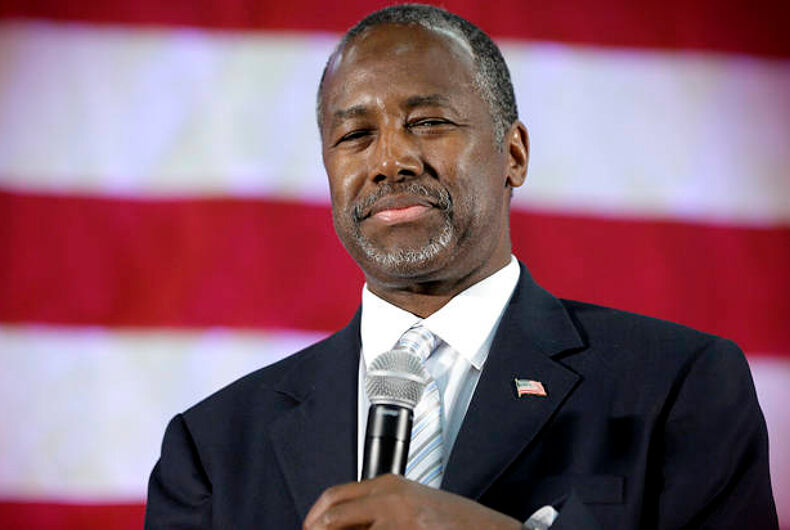 World Congress of Families (WCF), an anti-LGBTQ organization that the Southern Poverty Law Center has deemed a hate group for its activism targeting queer people, is holding its major annual summit this year in Budapest. The event’s theme is “Building Family-Friendly Nations: Making Families Great Again.”

According to the Budapest Family Summit, those speaking during panels and with presentations on May 26-27 at the event, held May 25 through May 28, will include some of the most notable anti-LGBTQ figures working in the world of international politics.

Appearing alongside these individuals was to be Secretary of Housing and Urban Development Ben Carson, whose name has now vanished from the list of presenters, reports Southern Poverty Law Center.

Carson has said in October that same-sex marriage was going to lead to chaos, called transgender rights “absurd,” and has previously called LGBTQ people “abnormal.” So the Trump Cabinet member would fit in well with this crowd, were he to appear.

Just some of those listed as speakers include: Rev. Dimitry Smirnov of the Russian Orthodox Church, who has compared homosexuality to a plague; Don Feder, WCF’s director of coalitions, who not only works against LGBTQ rights but also called for “Islam control” instead of “gun control,” and tried to stop Harriet Tubman from appearing on the $20 bill for the sin of not being white; Errol Naidoo, of the Family Policy Institute, who once said radical feminists and gays and lesbians create a “culture of death” that is “slowly killing off the human family in Western civilization,” and taking away the rights of Christians; and Theresa Okafor, WCF’s “Woman of the Year,” who has advocated for harsh penalties against LGBTQ people in Africa, including prison terms for gay sex and banning gay men from meeting in groups.

Explaining why the summit is being held in Budapest, the WCF website explains:

Hungary’s leadership in defense of family, life, and Christianity is well known in Europe. The adoption of key provisions in the Hungarian Constitution in 2011 defining marriage between a man and a woman and protecting human life from conception to natural death have made the Orban government the hero of pro-family and pro-life leaders from all over the world. Hungary’s leadership is fully committed to family friendly governance and has recently launched a new national motto, “Hungary, the Family Friendly Country.”

LGBTQ Nation has reached out to WCF and Budapest Family Summit for comment on why Carson’s name first appeared on the schedule and then disappeared. We will update if either or both respond.

Update: WCF returned our request for comment by sending an updated schedule, which does not include Carson as a speaker, and does include all of the aforementioned speakers.

Pride, consumerism, & the sale of a civil rights movement