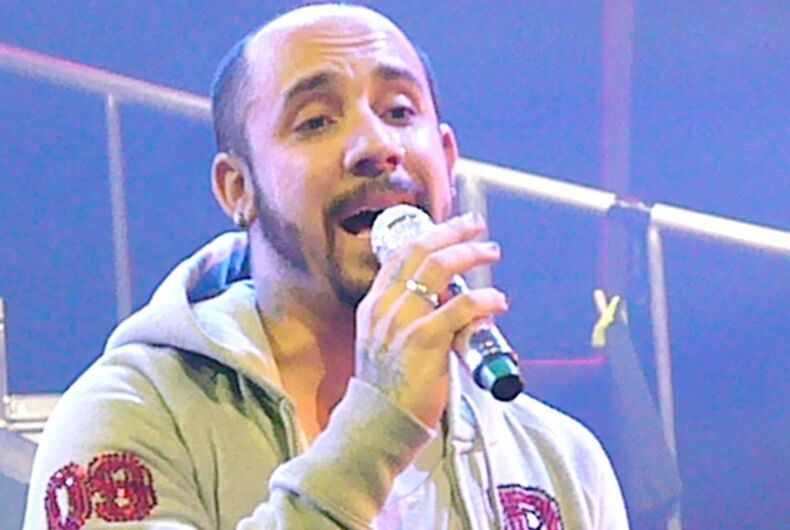 AJ McLean performing at a Backstreet Boys concert in Stockholm during the "This Is Us" tour, December 2009Photo: Wikimedia Commons

Backstreet Boy AJ McLean says he wishes both of his daughters grow up to be lesbians in an interview with Refinery 29.

His reasoning is just tired:

I will also go on record by saying, and I told my wife this, I hope that both of my daughters are gay because that takes all penis out of my life — I do not want to deal with boys ever. But if I do have to, they’re going to have to go through quite a lot of trials to go through me because my daughters are my life.

My initial idea was [that] when my first daughter goes on her first date [I would] tell the boy, “Look, I was in prison and all these tattoos were from prison so if you mess up you know I’m gonna hurt you.”

Putting aside the implication that lesbians don’t face homophobia and focusing on the general idea: No, just no.

I cringe when fathers say they don’t want their daughters to date, or how they’ll be mean to their straight or bisexual daughters’ boyfriends. Sure, it’s a “joke,” but the reason this particular joke gets repeated so much is because there’s truth to it: some fathers feel like it’s their right to protect their daughters from their own sex drives.

There is potential for heartbreak and violence for girls when they pursue heterosexual relationships, but straight and bi girls keep on dating boys because they want to.

This cliché is fundamentally about control over women’s bodies, and it implies that women are to blame for sexual assault and relationship violence rather than the men who perpetrate that violence.

A lot of the sexism that his daughters will face comes from men who think they have a right to control women’s sexualities. Their father saying exactly that doesn’t help them.

I’d rather see fathers say that they want their daughters to listen to their hearts, to know how to make good decisions, and to seek help when they need it, instead of joking about how they want to be the only penis in their daughters’ lives.

Texas bathroom bill might fail because of Democrats’ stall tactics

‘Are trans people human? Views differ’ is not neutral