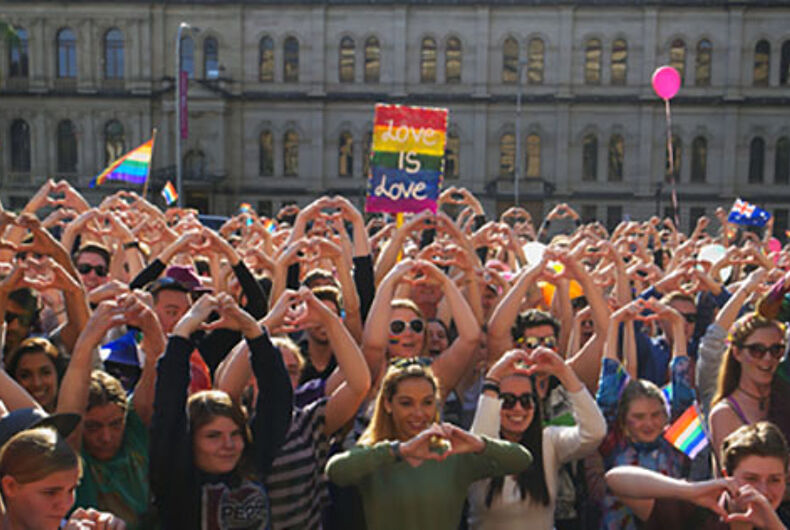 An Australian state parliament on Thursday apologized to hundreds of men convicted decades ago for having homosexual sex, as the government introduced legislation to throw out their criminal records.

Queensland State Premier Annastacia Palaszczuk delivered the apology to those affected by a prohibition on homosexual sex, which was repealed in 1990.

Once the legislation is passed, Queensland will join three states and the national capital in expunging criminal records for homosexual sex, which is no longer illegal anywhere in the country. Two states and a territory have not.

“You have been maligned and shamed, and for that we express our deep regret for the hurt you have suffered,” Palaszczuk told the Legislative Assembly.

“In criminalizing homosexual activity between consenting adults, the Legislative Assembly of this state dishonored its citizens and institutionalized prejudice and discrimination,” she added.

Alan Raabe was convicted of aggravated sexual assault after what he said was a consensual homosexual act in 1988, and was in parliament to hear the apology.

The 63-year-old said his ambition of being a teacher had been dashed by his conviction, but he is happy to finally have his criminal record wiped clean.

“It was like a cloud lifted, somebody cared,” Raabe said.

Although homosexuality is no longer illegal, those convicted still have to declare their criminal records to potential employers to work in public service, education and childcare industries.

Under the proposed changes which appear almost certain to become law, a man will be able to apply to the Justice Department for his conviction for an “act of gross indecency” to be expunged.

Queensland is regarded as Australia’s most conservative state.

Homosexual acts between consenting adults in private were punishable by up to 14 years in prison in Queensland and state police were renowned throughout Australia in the 1980s for the priority they gave to arresting and harassing gays.

In the late 1980s, the Australian government threatened a public attack on the Queensland government over media reports that undercover police were propositioning gays in public toilets to make arrests and charging established gay couples for having sex in their own homes.

The then state premier replied in a letter that he was doing his “level best for this very difficult issue” of police harassment of gays. The government was changed or the first time in 32 years before the law was reformed.

© 2017, Associated Press, All Rights Reserved.
This material may not be published, broadcast, rewritten, or redistributed.
Australia, criminalization of homosexuality, Homophobia, Queensland