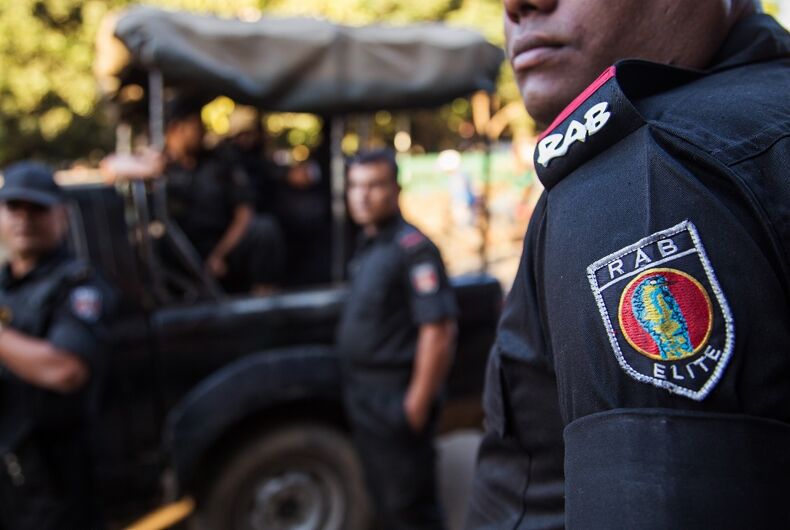 Rapid Action Battalion or RAB is an elite anti-crime and anti-terrorism unit of the Bangladesh Police.Photo: Shutterstock

An elite police unit in Bangladesh has arrested at least 27 men in a raid of a private gay party.

According to the police, the men were mostly students between the ages of 20 and 30 who came together every two months for a party at a community center in Keraniganj, a suburb of Bangladesh’s capital Dhaka. The police received a tip about the meet-up, which was organized on social media.

“They have been arrested for homosexuality and consuming illegal drugs,” said Zahangir Hossain Matobbar, a commander in the Rapid Action Battalion.

He said that police found drugs and condoms on the students. Students were arrested before they had sex so they couldn’t be prosecuted for sodomy, so they will just be charged with drug offenses.

The owner of the community center was also arrested.

Homosexuality is a crime in Bangladesh under a law written when the Muslim-majority nation was still under British colonial rule. While the law is rarely used, it can result in up to life in prison.

Last year gay activist was stabbed to death in Bangladesh. Xulhaz Mannan, 35, was a USAID official and the founder of the only LGBTQ magazine in the country.

Police arrested a man associated with a militant group and believe that four other men participated in the killing.

This dress made of Starburst wrappers is the sweetest thing