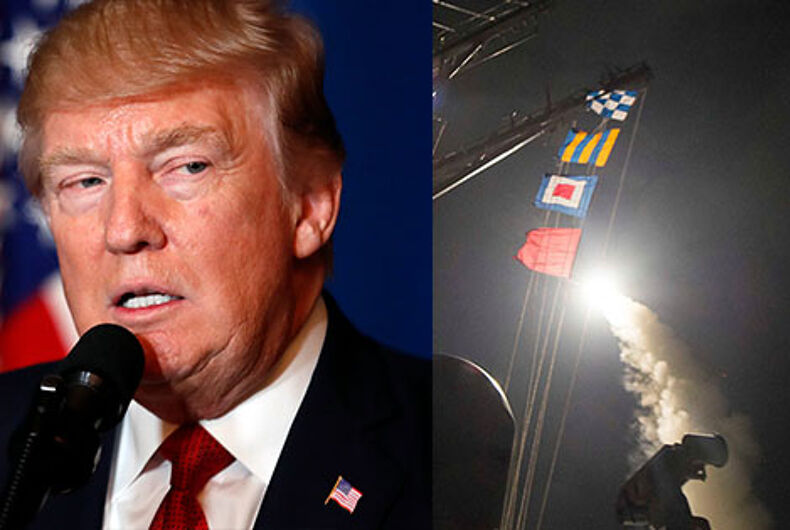 They may have helped elect Donald Trump, but the homophobic, racist, far-right ultra-conservative wing of the Republican Party turned its back on him Thursday night, faster than a Tomahawk cruise missile.

The president ordered a targeted military strike consisting of 59 such missiles on a base inside Syria, in response to a deadly nerve gas attack inside that war-torn nation that killed at least 85 people, more than a dozen of them children.

But given the commander-in-chief is the same man who four years ago declared, “We should stay the hell out of Syria,” conservatives blew a gasket at the reversal of Trump’s longstanding criticism of U.S. involvement in Syrian president Bashar Assad’s six-year-long civil war.

“I condemn the strikes,” said Richard Spencer, the self-styled neo-Nazi who started a racist white nationalist movement some call “alt-right.” “I’m going to wait and see. Perhaps Trump is slapping Assad across the nose and won’t go further. Perhaps Russia was informed of the attacks. Worst-case scenario: We’re replaying the 2000s: A conservative comes to office on a populist message and becomes a globalist and neocon shill. Again, I’ll wait and see but I’m prepared to denounce Trump.”

Milo Yiannopoulos hasn’t been his usual loudmouth self ever since he lost a six-figure book deal and a keynote address at CPAC after it was revealed he had more than once defended pedophilia. Politico reported he did make a statement on the missile strike, however: a text message describing it as “fake and gay,” in all-caps. Yiannopoulos, the openly gay “provocateur” who resigned from Breitbart because of his personal controversy, chose not to elaborate.

Both of these blowhards paled in comparison to the all-out rage exhibited by blogger Mike Cernovich, who Politico noted livestreamed his effort on Periscope, spending several hours rallying opposition to the strike.

Not only that but it was Cernovich who broke news of the attack, 90 minutes before NBC:

Interestingly, Cernovich blamed “outside actors” for convincing Trump to launch the attack, not the president himself. “They want war. Deep state, all these people want it, man,” he said. And then in a reference to the mainstream media, he said, “They’re trying to con Trump into believing the people want war.”

He even tweeted a suggestion that the deadly gas attack that was prompted the attack was an inside job, by none other than the president’s staunchest Republican adversary in the U.S. Senate:

Misogynist antigay right-wingnut Gavin McInnes — who founded the pro-Trump “Western chauvinist fraternal organization” the Proud Boys and a decade ago launched Vice Media, joined Cernovich on Skype, to express similar skepticism. And in classic McInnes style, he tried to make a connection between the attack and a false-rape claim: he said a female friend accused a man of rape, and when McInnes violently confronted the man to defend her honor, McInnes claimed he was quickly convinced that he was not guilty of rapem because of that man’s incredulous response.

Callers tossed out the idea that the “deep state” had threatened to kill Trump and his family if he did not attack Syria; one voiced his suspicion that “the whole thing” could be traced back to former President Obama’s national security adviser, Susan Rice. “Yeah, could be,” said Cernovich.

Politico also noted that the debate over the strike was especially virulent on The_Donald subreddit and 4Chan. One poster explained it all away with this: “Calm the fuck down all you concern trolls. This isnt WWW3 – its trump putting America first. We need to stop Assad from killing his people. They flee and guess where they are going?”

Finally: Court strikes down last ban on gay & lesbian foster parents in US