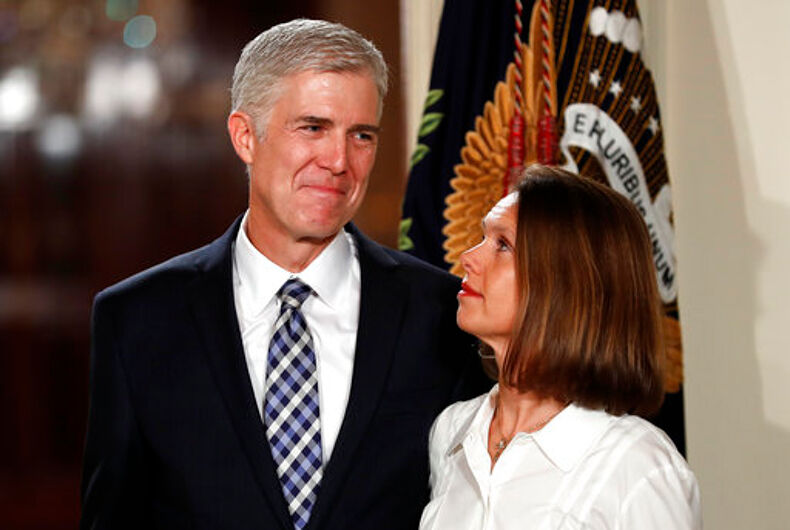 FILE - In this Tuesday, Jan. 31, 2017, file photo, Judge Neil Gorsuch stands with his wife Marie Louise Gorsuch as President Donald Trump announces him as his choice for the Supreme Court in the East Room of the White House in Washington. Somewhere between the Republican caricature of the next justice of the Supreme Court as a folksy family guy and the Democrats’ demonization of him as a cold-hearted automaton, there stands Neil Gorsuch. Photo: (AP Photo/Carolyn Kaster, File)

Somewhere between the Republican caricature of the next justice of the Supreme Court as a folksy family guy and the Democrats’ demonization of him as a cold-hearted automaton, stands Neil Gorsuch.

Largely unknown six months ago, Gorsuch has seen his life story, personality and professional career explored in excruciating detail since he was nominated by President Donald Trump 10 weeks ago.

The portrait that emerges is more nuanced than the extremes drawn by his supporters and critics.

Gorsuch is widely regarded as a warm and collegial family man, boss and jurist, loyal to his employees and kind to those of differing viewpoints. He also has been shown to be a judge who takes such a “rigidly neutral” approach to the law that it can lead to dispassionate rulings with sometimes brutal results.

Four times during his confirmation hearings, Gorsuch invoked a “breakfast table” analogy, telling senators that good judges set aside what they have to eat — and their personal views — before they leave the house in the morning to apply the law and nothing else to the facts of the cases at hand. It was all part of Gorsuch’s artful effort to reveal as little as possible of his own opinions.

“We’re all human beings,” Gorsuch told senators, “but the judge’s job is to put that stuff aside and approach the law as you find it.”

That ability to compartmentalize, combined with Gorsuch’s studious refusal to signal his thinking on contentious issues, left Democrats frustrated. For all his many visits with senators and his hours in the witness seat, Gorsuch had not revealed his core beliefs and may have, according to Democrats, a bias favoring powerful interests over ordinary people.

The question for Sen. Dick Durbin, D-Ill., was “whether there’s a beating heart and an independent streak” behind Gorsuch’s silver hair and smooth delivery.

Republicans saw Gorsuch’s disciplined and detached approach as evidence of the fair and independent mindset that the U.S. needs on its highest court.

Confirmed after a rancorous 54-45 vote in the Senate, Gorsuch soon will largely recede into the cloistered halls of the Supreme Court. He won’t vanish entirely; other justices have written books, done speaking tours and interviews.

But Gorsuch won’t again face this kind of grilling, into everything from his views on abortion to the avid outdoorsman’s favorite fishing holes. (He largely pleaded the Fifth on both.)

The 49-year-old judge was happy to reminisce about his years as a student and lawyer before becoming a federal appellate judge in Denver 10 years ago. He relied on self-deprecating humor and a goodness-gosh-golly demeanor in outsize doses as he deflected the questions he didn’t want to answer.

“I might be a little corny,” he said at one point to the Senate Judiciary Committee.

“Oh, now we’re talking,” Gorsuch enthused when the talk turned to fly fishing. “You can’t focus on the worries of the world when you’re only worried about a trout.”

Gorsuch’s impressive scholarly and legal credentials were on full display: Columbia, Harvard and Oxford, the latter with scenes that Gorsuch recalled were straight out of a Harry Potter movie.

But Gorsuch, known for the clarity of his legal writings, traced the roots of his success back to an even earlier source, Sister Mary Rose Margaret, the nun of whom he says: “She taught me how to read and she taught me how to diagram a sentence.”

Gorsuch, whose mother was a state legislator and then director of the Environmental Protection Agency under President Ronald Reagan, tried to play down the political elements in his background. Gorsuch stressed that when issues such as torture arose during his time in President George W. Bush’s Justice Department, he acted not as a policymaker but as a “speechwriter” or “a lawyer for a client.”

He did acknowledge, though, that an email he sent criticizing lawyers at big firms for representing detainees being held by the U.S. military at Guantanamo Bay in Cuba was “not my finest hour.”

Perhaps no ruling got more attention over the past 10 weeks than a case in which Gorsuch came down against a truck driver who was fired for leaving his trailer of meat on the side of an Illinois road after breaking down on a frigid night in 2009 and fearing he would freeze to death. Asked whether the man’s firing wasn’t absurd, Gorsuch said simply: “My heart goes out to him. It’s just not my job.”

For all that he shared, Gorsuch did his best not to telegraph where he might land on a range of topics that he could confront early in his time as a justice, even though both sides think they have a pretty good idea how he would rule.

Cases about voting rights, gun control, religious rights, housing discrimination and immigration are pending before the court. The dispute over Trump’s proposed ban on visitors from six majority Muslim countries could be on the way as well.

Gorsuch was careful not to offer any hints on these issues in his exchanges with committee Democrats and Republicans.

Questioned about his views on the Roe v. Wade decision that established a woman’s right to have an abortion, Gorsuch would go no further than to voice his respect for legal precedent and say “no one is looking to return us to horse and buggy days.”

Sen. Mazie Hirono, D-Hawaii, spoke for many in her party when, nearing the end of two days of testimony, she told Gorsuch: “It remains to be seen whether you will be a justice for all or a justice for some.”