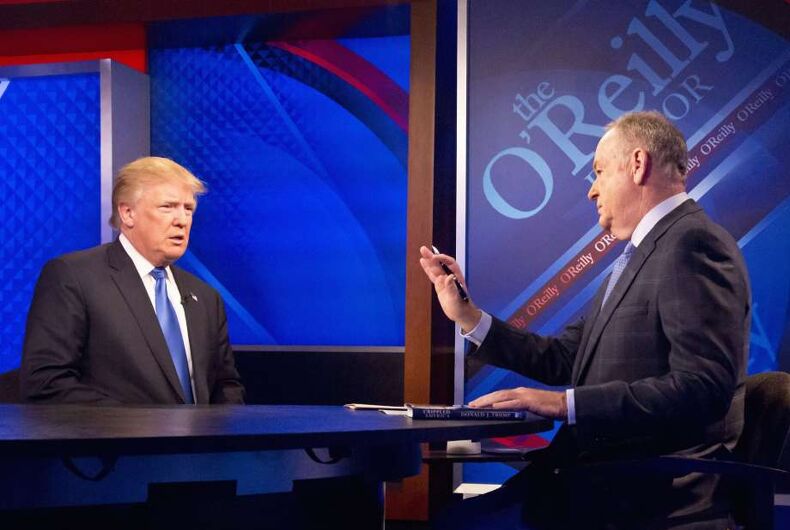 Trump recently defended Bill O’Reilly amid revelations that he and Fox News have paid out over $13 million to women who have accused the network’s biggest star pundit of sexual harassment.

“I think he’s a person I know well — he is a good person,” Trump said of O’Reilly. “I don’t think Bill did anything wrong.”

To make matters stranger still, talking heads on Fox News, such as the always loyal Sean “Bad for America” Hannity, defended now President Trump in the wake of the tape’s release, parroting Trump’s own defense of the incident as nothing more than “locker room talk.”

Trump bragged about committing sexual assault in the 2005 tape, and told Bush that he had to “use some Tic Tacs, just in case I start kissing (actress Arianne Zucker). You know, I’m automatically attracted to beautiful — I just start kissing them.”

The Hollywood Reporter describes the sexual harassment seminars as “a series of routine workshops at multiple divisions at Fox, the most recent one taking place Tuesday on the studio lot in Los Angeles,” led by human resources executives.

An attendee at that one hour seminar on Tuesday, who wishes to remain anonymous, claimed a photo of Trump, Bush, and Zucker appeared on the screen, drawing gasps.

“They went through the scenario of the tape, why it was harassment, and why it’s something you should report,” the employee is reported as having said. “There was an audible gasp in the room, like, ‘Can you believe this is happening?’ Trump was defended on Fox News after that tape came out…. Someone joked about getting fired for harassment and wondering if the defense could be, ‘We were only told a behavior was bad once in a seminar,’ but Fox News said it was ‘just locker room talk’ over and over again.”

The source told The Hollywood Reporter that a human resources executive “quipped during the presentation that the department handled all of Fox except Fox News, so the presentation could not include any information about Ailes or O’Reilly.”

“It was a joke…but it did not play well in the room,” the employee added.