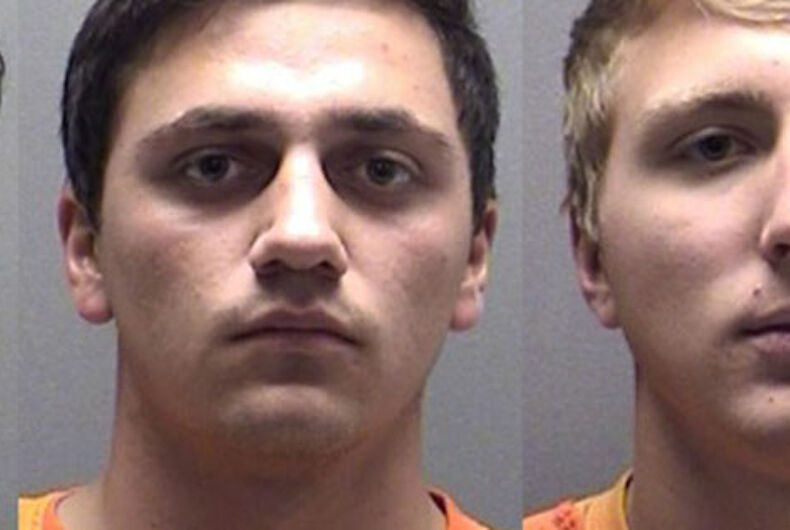 The arrests of at least 13 students of La Vernia High School in Texas have sent shockwaves through this San Antonio suburb, reeling from accusations that not only did varsity members of the football team use rape and sodomy to haze underclassmen but that the coaches knew about it and school leaders enabled it to persist.

John Rutowski, Christian Roberts and Colton Weidner are the latest students to be arrested, last Tuesday, on charges of sexual assault. All three are 18 years old, according to the Wilson County Sheriff’s Office.

Prior to their arrests, a federal lawsuit was filed in the Southern District of Texas “seeking injunctive relief and monetary damages arising from their son’s sodomization as part of a team ‘initiation’ ritual, allegedly known about by administrators and coaches in the La Vernia Independent School District,” according to KENS.

According to arrest affidavits, Rutkowski, Weidner, and an unnamed juvenile overpowered and held down a struggling 15-year-old student, while Roberts inserted a flashlight into his rectum. The victim did not report the alleged assault to his parents at the time, but did reveal the attack to counselors at the Children’s Alliance of South Texas last month, in an interview that was videotaped.

Since the hazing scandal broke in the small town of 1,000, dozens of alleged victims have come forward to authorities in the last month with claims of sexual assault during hazing rituals, according to the Daily Beast, including sodomy using not just flashlights but also Coke and Gatorade bottles.

The students are not the only ones in trouble, however.

School coaches allegedly “sanctioned these rituals,” according to the federal complaint, while other school officials “turned a blind eye toward the abuse, even after the abuse was reported to them.”

A pervasive ‘rape culture’ dominated the School’s football program, including hazing, harassment, bullying, physical and sexual abuse, and other unlawful treatment of athletic program participants. …
The subject hazing rituals and traditions are a form of bullying and have been part of the culture of the School’s football team for at least a decade, according to news accounts, and possibly longer. The teams’ coaches have sanctioned these rituals, while other school officials, including La Vernia ISD and the School’s principal, athletic director, and coaches, turned a blind eye toward the abuse, even after the abuse was reported to them.

John Kemmerer “J. K.” Ivey, the attorney who filed Tuesday’s lawsuit on behalf of the parents of “Child Doe,” told The Daily Beast last week that the case is just the first in what he believes will be a “tidal wave” of civil suits.

If the details presented in the case of “Child Doe” are anything like what happened to other students, that appears to be a certainty. Here’s how the San Antonio Current reported those details, and be warned, they are disturbing:

“In class, a teacher advised the students that she had heard about the assault and told the class that ‘it was wrong’ and to ‘cut it out,’” the lawsuit alleges. The family claims the teacher told the student she’d even emailed Layne, then the high school’s athletic director and head football coach, about the student’s “initiation” to the team.

Layne, according to the lawsuit, then held a locker-room chat with the varsity squad, reportedly saying, “You won’t be able to get a job, no girl will want to date you and you could go to prison … cut it out.”

According to the lawsuit, upperclassmen grabbed this student two more times before practice, slammed him onto the locker room floor and “punched and fondled” him before he fought them off.

Then, at the start of the fall 2016 football season, the student was once again jumped by teammates in the locker room.

“As he was forcibly held down by two of them, the third took a cardboard tube from a coat hanger and pushed it into CHILD DOE’s anus,” the lawsuit claims.

He said his teammates were laughing the whole time and told him, “New year, new initiation.” A few weeks after that, he narrowly escaped another “initiation” when he rolled under a bench and hid there until his assailants eventually gave up. Some weeks after that, according to the lawsuit, a senior on the team approached him during a workout, held up a metal pipe and threatened to rape him with it. The senior only dropped the pipe and walked away after a coach entered the room, according to the lawsuit.

Beyond Stonewall: Why modern LGBTQ Americans should be thinking globally