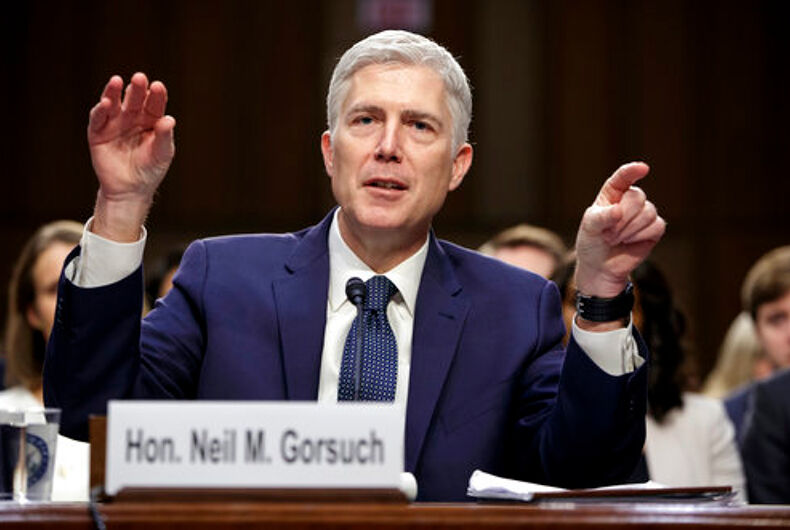 WASHINGTON (AP) — Wondering when Supreme Court nominations became so politically contentious? Only about 222 years ago — when the Senate voted down George Washington’s choice for chief justice.

This year’s brouhaha sees Senate Democrats and Republicans bracing for a showdown over President Donald Trump’s nominee, Neil Gorsuch. It’s the latest twist in the political wrangling that has surrounded the high court vacancy almost from the moment Justice Antonin Scalia died in February 2016.

“We are in an era of extreme partisan energy right now,” said University of Georgia law professor Lori Ringhand. “In such a moment, the partisanship will manifest itself across government, and there’s no reason to think the nomination process will be exempt from that. It hasn’t been in the past,”

Each side has accused the other of unprecedented obstruction. Republicans wouldn’t even hold a hearing for Merrick Garland, President Barack Obama’s nominee. Democrats are threatening a filibuster, which takes 60 votes to overcome, to try to stop Gorsuch from becoming a justice. If they succeed, Republicans who control the Senate could change the rules and prevail with a simple majority vote in the 100-member body.

As she lays out in “Supreme Court Confirmation Hearings and Constitutional Change,” the book she co-wrote, Ringhand said, “There were more rejected nominees in the first half of the nation’s history than in the second half. That controversy has been partisan in many cases, back to George Washington.”

“Confirmations have been episodically controversial,” said Ringhand, who is the Georgia law school’s associate dean. “The level of controversy has ebbed and flowed.”

John Rutledge, a South Carolinian who was a drafter of the Constitution, was the first to succumb to politics. The Senate confirmed Rutledge as a justice in 1789, a post he gave up a couple of years later to become South Carolina’s chief justice.

In 1795, Washington nominated Rutledge to replace John Jay as chief justice. By then, Rutledge had become an outspoken opponent of the Jay Treaty, which sought to reduce tensions with England. A year after ratifying the treaty, the Senate voted down Rutledge’s nomination.

The rejected chief justice was partly a victim of his own design. He was among the drafters who insisted Congress should have a role in the Supreme Court appointment process, rather than leave it solely to the president, historian Henry Abraham wrote in his history of high court appointments, “Justices, Presidents, and Senators.”

Rutledge was not the last to get close to the lifetime appointment to the court only to see it yanked away. The most recent were Garland and former White House counsel Harriet Miers, whose nomination by President George W. Bush was withdrawn under pressure from conservatives.

In between, President John Tyler broke with the Whigs who controlled the Senate and couldn’t even get a vote for three nominees. A fourth was rejected and only one of Tyler’s choices ever made it to the court. A quarter-century later, following the Civil War, the Republican-dominated Congress actually abolished a Supreme Court seat rather than act on a nomination by President Andrew Johnson.

Even some who have made it to the court endured difficult confirmations. Justice Clarence Thomas faced questions about former colleague Anita Hill’s claims that he sexually harassed her. Justice Felix Frankfurter’s loyalty to the United States was questioned because of his birth in Austria, his Judaism and his affiliation with the American Civil Liberties Union.

But American politicians don’t tend to look back so far. Democrats fixate on 1968, the last year of the Johnson administration, when Republicans and southern Democrats came together to filibuster the elevation of Justice Abe Fortas to be chief justice.

Republicans point to 1987, when Democrats led the way in rejecting Ronald Reagan’s nomination of Robert Bork for the high court. The 58-42 vote against Bork came after a full hearing and Senate debate.

Still, it’s understandable for the public to see the Gorsuch fight as the product of a recent change in American politics.

Barbara Perry, a University of Virginia expert on the presidency, said she spoke about the confirmation process recently in Charlottesville, Virginia.

“A woman stood up and said, ‘When did the court become so political?'” Perry recalled. Around the founding of the country, she and a colleague replied, “or at least since we’ve had two political parties.”