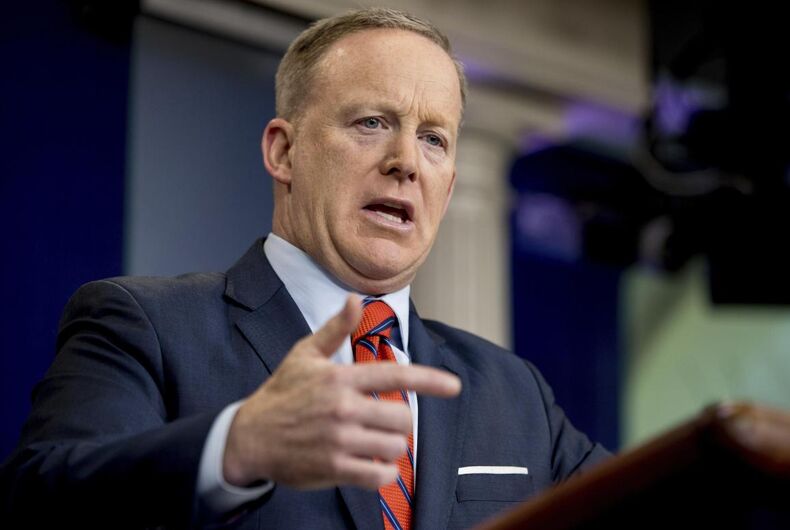 White House press secretary Sean Spicer said during Tuesday’s press briefing that Adolf Hitler did not use chemical weapons during World War II. He did.

The Nazis, under Hitler’s direction, used cyanide gas in the mass killings of Jewish people, members of the LGBTQ community, and others at concentration camps.

Spicer was attempting to contrast Hitler with Syrian President Bashar Assad, who attacked his own people with sarin gas, leading to President Trump ordering airstrikes.

“You had someone as despicable as Hitler, who didn’t even sink to using chemical weapons,” Spicer said. “If you are Russia, ask yourself, is this a country and regime that you want to align yourself with?”

When challenged by a reporter over his “alternative facts,” Spicer clarified that Assad used them differently from Hitler.

“When it comes to sarin gas, [Hitler] was not using the gas on his own people the same way that Assad is doing,” Spicer said.

To be clear, those taken to concentration camps were Hitler’s own people, even if he wished they weren’t.

“He brought them into the Holocaust centers, I understand that,” he continued. “I was saying in the way that Assad used them where he went into town, dropped them into the middle of town. I appreciate the clarification. That was not the intent.”

“In no way was I trying to lessen the horrendous nature of the Holocaust, however, I was trying to draw a contrast of the tactic of using airplanes to drop chemical weapons on innocent people,” Spicer said in a statement after the briefing.

Spicer has been getting dragged on Twitter over the comments, including by Chelsea Clinton who suggested he visit the Holocaust Museum.

“It’s a few blocks away,” she helpfully noted.

To Sir Ian McKellen, life as a closeted gay man was ‘a terrible oppression’

America’s most homophobic bureaucrat now works for the Trump administration