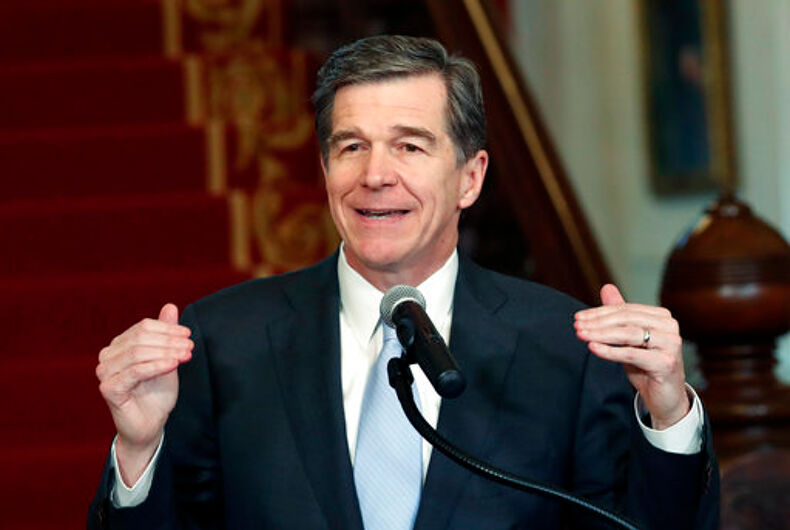 Many fellow Democrats also were upset with the compromise, which got rid of the provision requiring transgender people to use public restrooms corresponding to their birth certificate but kept state lawmakers in charge of future bathroom policies. That provision in particular angered businesses, the NCAA, the NBA and others who withdrew events and expansions from North Carolina at a steep cost.

“I am torn apart because I want to support my governor, and I want to support the efforts that we are trying to make, to make things at least a little bit better,” Democratic Rep. Yvonne Holley of Raleigh said during debate on the legislation, adding that it reminded her of past disputes in North Carolina history over racial equity. Although she voted for the compromise, she said: “there is more to this than about using the bathroom.”

Indeed there is: The law known as House Bill 2 also had prevented local and state governments from passing nondiscrimination ordinances protecting on the basis of categories such as sexual orientation and gender identity. It was replaced by a moratorium on local governments passing them in most cases for nearly another four years.

For months, opponents of the law insisted they would accept only a full repeal. Some joined hard-line conservatives in opposing the bill, though their reasons differed: Many Republicans saw no need for any repeal.

“It kicks HB2 down the road until 2020, keeping most of the awful law on the books for someone else to deal with,” said Chris Sgro, executive director of Equality North Carolina. “That’s not leadership, Gov. Cooper.”

Cooper said the compromise was the best he could get with Republican leaders holding veto-proof majorities in the House and Senate. But he said it got HB2 repealed and restored some local LGBT protections for workers and contracts.

“This is not a perfect deal, and it is not my preferred solution,” he said during a news conference.

HB2 caused the NCAA to cancel championships in the state this year and has discouraged some companies from relocating to or expanding in the state. An Associated Press analysis last week found that HB2 would cost the state more than $3.76 billion in lost business over a dozen years.

The NCAA set a deadline of last week for action on HB2 or North Carolina likely would miss out on holding championship events through 2022. Officials now say they’ll decide this week whether the new law goes far enough.

“The jobs are leaving now. The money’s going out of pockets from people now. … We had to repeal this law now,” Cooper said. As for gay rights groups opposing the bill, “I hope that they will see and that they will know my heart and they will see that I will continue to fight for LGBT rights.”

To be sure, Human Rights Campaign, Equality NC and other groups also leveled plenty of blame on GOP legislative leaders. But many of the same people who spent last year protesting Republican Gov. Pat McCrory, who signed HB2, protested Cooper.

“Roy Cooper forfeited the chance to make a principled stand against a new bill that essentially is window-dressing,” said Grayson Haver Currin of Raleigh, a registered Democrat who last year led weekly blastings of air horns and noisemakers near the Executive Mansion in protest of HB2. He and about 50 others performed again Thursday evening across the street to oppose Cooper’s signing of the new bill.

Twenty-one Democrats in the legislature voted against the compromise Cooper asked them to support. Some House Democrats said on the floor they couldn’t support a measure that still keeps discrimination on the books.

The next gubernatorial election isn’t until 2020. While some Democrats who voted for the bill could face primary challenges in 2018 because of their “yes” votes, the party also has a vested interest in eliminating the Republicans’ veto-proof majorities to give the governor more leverage.

Mac McCorkle, a political consultant to the two previous North Carolina Democratic governors, said he doesn’t think complaints from outside groups will hurt Cooper unless he disappoints them repeatedly. The electorate won’t turn on Cooper if businesses consider the state again, he said.

“The barometer for most people is going to be the national economic developments,” McCorkle said.

And despite the complaints, nearly 40 Democrats voted for the agreement. Democratic Rep. Mickey Michaux of Durham, a veteran of the civil rights movement, said it was the best deal the governor could assemble given the circumstances.

“I’m not going to throw my governor under the bus,” Michaux said before voting for the bill. “I’m going to support my governor so that he has an opportunity for a second term.”