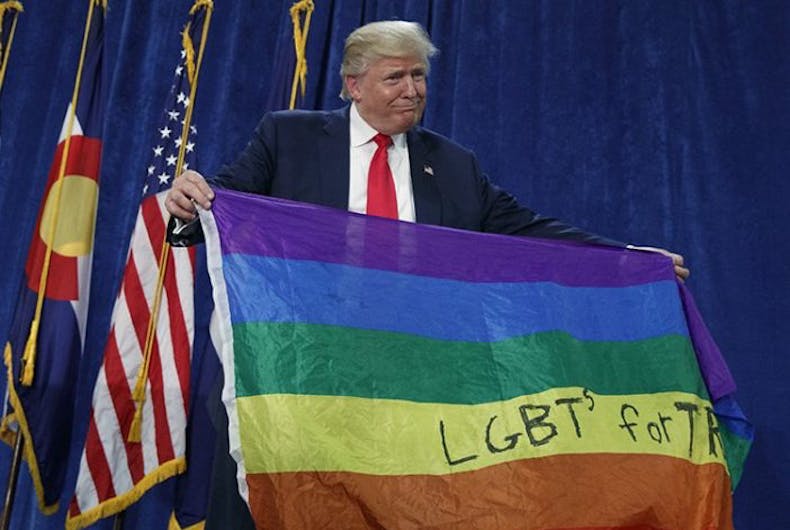 The New York Times recently devoted an editorial to calling out Donald Trump for his opposition to LGBTQ rights.

The editorial opened by recounting how then-candidate Trump held a rainbow flag at a rally last October, and a spokesperson later said that he would be a “president for all Americans.”

It turns out, though, that saying a few vaguely nice words doesn’t mean much. The Times cited several of Trumps homophobic and transphobic appointments, as well as the Trump Administration’s decision to roll back guidelines from the Obama Administration that banned anti-transgender discrimination in schools.

It’s not too late, of course, for Mr. Trump to act like the transformational Republican on gay rights that some of his supporters hoped he would be. He could, for instance, urge Congress to pass a federal anti-discrimination bill. Yet his record of empty talk makes that seem as unlikely as the sight of a Republican presidential candidate waving a gay pride flag.

Back in November, Trump had not come out in favor of any federal legislation that would expand LGBTQ rights.

Sure, he seemed to actually have some gay friends, but he also had a history of homophobic and transphobic statements and opposition to same-sex marriage.

But what made it really obvious that he wouldn’t be a champion of LGBT rights were two of the bigger themes of his campaign.

First, his campaign was based on pandering to Republicans who love cruelty directed at minorities. While their attention was focused more on immigrants, women, and Muslims, it’s hard to imagine them chanting “Homophobia’s got to go” in between “Trump that bitch” or “Build a wall.”

The fundamental message of the campaign was Trump promising to be mean to everyone conservatives hate. That he mostly ignored LGBT people during his campaign was not very reassuring considering the context.

Second, his campaign shied away from the specifics of policy, making it very clear that a Republican Congress and whatever partisan hacks he nominated to the Executive Branch would be calling the shots if he won the presidency.

Passing legislation is work, and Trump clearly didn’t want any part in that work. Republicans stood by him, knowing that if he won he would let them do whatever they wanted.

How could anyone think that Trump would steer the Republican party to the left on any issue? That a man who cares about nothing more than getting applause and watching TV would stand up to a Republican Congress and all the Republicans who work for him just to support one minority group’s rights?

How can anyone who pays attention to national politics think there’s any chance that Trump will stick his neck out for an anti-discrimination bill that would have no chance of getting through the Republican Congress?

Trump is not very bright and easily confused. He held a flag upside-down and smiled for the camera. It’s disheartening, really, that there are people who are paid to write about politics who just don’t understand the difference between a photo-op and an actual policy position.