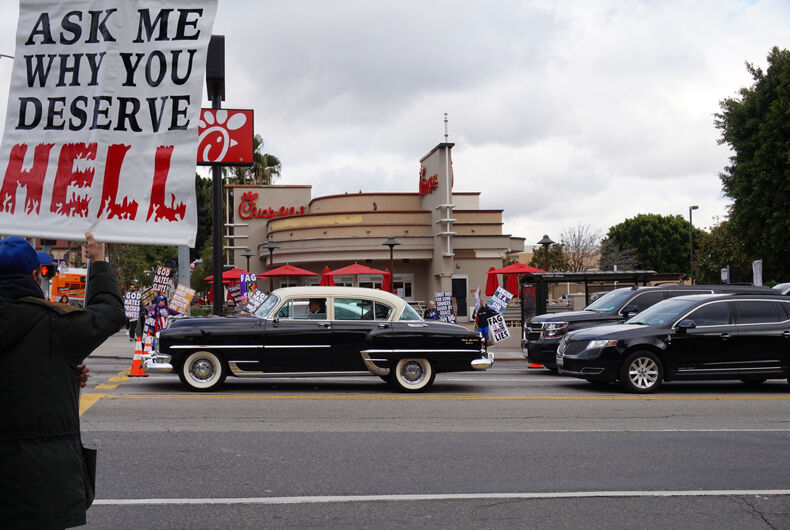 LOS ANGELES, FEB 26TH, 2017: A classic car is surrounded by extreme right religious protesters on the way to the red carpet area at the 89th Academy Award ceremony.Photo: Alex Millauer

Hypocritical religious leaders are hardly a new breed. In the Bible, Jesus reserved his harshest words for Pharisees – the equivalent of modern day religious right ministers and organizational leaders combined with governmental authorities.

Christ condemned them as “snakes,” “blind guides,” and a “brood of vipers” for using their influence to castigate and condemn instead of teaching peace and love. Instead of lifting others up, they chose to make life difficult for the poor, women, and minority groups.

In Matthew 23, he is quoted as saying, “Woe to you, teachers of the law and Pharisees, you hypocrites! You are like whitewashed tombs, which look beautiful on the outside but on the inside are full of the bones of the dead and everything unclean. In the same way, on the outside you appear to people as righteous but on the inside you are full of hypocrisy and wickedness.”

Religious right leaders like Tony Perkins, Bryan Fischer, and Matt Barber have picked up the Pharisees sandals over the past couple of decades and, sadly, they seem to have missed most of the lessons taught by the savior they claim to worship. In all reality, the Jesus described in the Bible would likely not recognize them as followers since they refuse to listen to his teachings.

Barber, head of the Liberty Counsel, urged governors of states that have had their anti-marriage equality laws overturned in the courts to defy the rulings, saying, “It’s time for governors to reject these opinions, and that’s what they are. [They need to] say ‘No thank you, we are a sovereign state and we are going to adhere to our constitution in this state’.” Barber’s organization is a legal group and yet he’s literally advocating that politicians ignore the rule of law.

Fischer, a talk radio host and bigwig at the American Family Association has gone down a similar route. Following the court ruling that overturned Idaho’s constitutional amendment, he tweeted, “Governor should ignore unconstitutional ruling. Overthrow of federal tyranny can begin today in Idaho if governor orders clerks not to issue same-sex marriage licenses.”

In the New Testament, Israel had been conquered by the Roman Empire during Jesus’ time. Many of his followers urged him to defy the government and set up his own faith-based regime. After all, how can you lose when you’re the son of God? Christ, however, wasn’t interested. He instructed his followers to pay their taxes, follow the law, and respect authority.

Perkins, head of the Family Research Council and a regular talking head on television news programs, takes things a step further. His organization has been designated a “hate group” by the Southern Poverty Law Center and he has long-standing ties to the Ku Klux Klan.

Speaking on the radio, Perkins proclaimed that pro-gay Christians shouldn’t have the same religious rights that conservatives do because “true religious freedom” only applies to “orthodox religious viewpoints.” Not only does Perkins want to deprive secular Americans of their freedoms, now any Christians outside of his own far right circle are suspect.

Christ, however, even went so far as to tell his followers to respect the authorities of his day and follow the secular law – while ignoring their obvious religious hypocrisy.

“The teachers of the law and the Pharisees sit in Moses’ seat. So you must be careful to do everything they tell you. But do not do what they do, for they do not practice what they preach. They tie up heavy, cumbersome loads and put them on other people’s shoulders, but they themselves are not willing to lift a finger to move them.”

Maybe it’s time for these puffed up Puritans to take a dose of their own medicine.