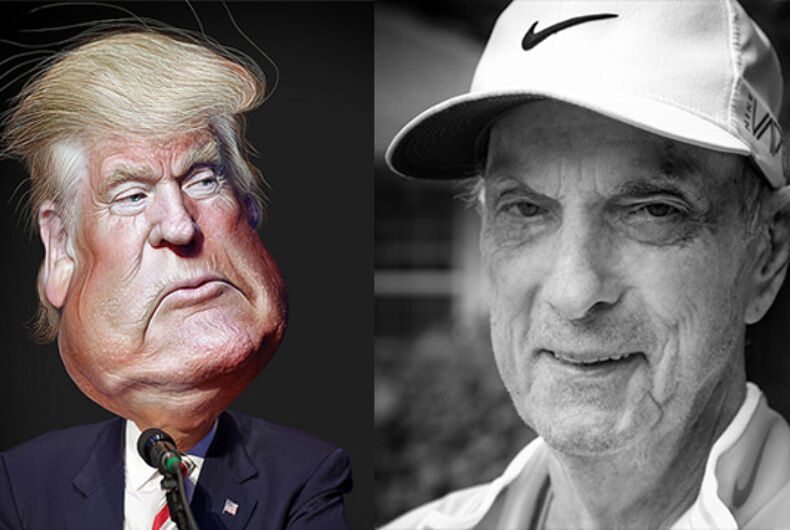 Michael Garland Elliott (r) passed away after his ex-wife lied to him, saying Trump had been impeached.Photo: Trump caricature by Donkey Hotey, via Flickr

Would you lie to a dying loved one to make them happy in their final moments? An Oregon man’s “ex-wife and best friend” did just that, telling him that President Donald Trump had been impeached.

Michael Garland Elliott died on April 6, and his obituary, published in The Oregonian, includes his unique final moments:

Mike ran out of family long ago and is survived by his ex-wife and best friend, Teresa Elliott. Though their marriage ran aground, their friendship only grew stronger and hers was the last voice Mike heard. And the last thing she said to him was “Donald Trump has been impeached.” Upon hearing that he took his final, gentle breath, his earthly work concluded.

“I knew it was his very, very last moments,” Teresa Elliott told The New York Daily News. “I knew that would bring him comfort and it did. He then took his final breath.”

She described her ex-husband as a “news junkie,” and said he died from congestive heart failure.

She added that Elliott regularly expressed his disapproval of Trump.

“He hated his effing guts,” she said.

When asked if she regretted lying to Elliott in his final moments, she responded, “Oh God no.”

“If I could leave him with a happy piece of news then why wouldn’t I?” she said. “And maybe in the end it won’t turn out to be a lie.”

His obituary also includes that he was born in either 1940 or 1941, saying, “he honestly didn’t know!” It describes him as an avid golfer, and notes that after college he “moved to Long Beach, Calif., where, among other things, he joined a semi-pro basketball team that toured the country playing exhibition games, dressed as women. At such times Mike was called Skaggy Maggie and continued round-ball domination, albeit with a different uniform.”