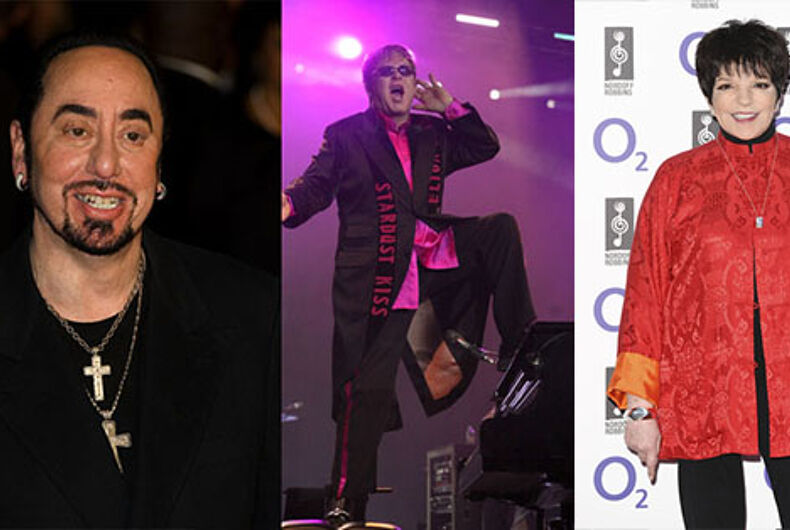 Liza Minella’s late former husband, David Gest, was so enraged that Sir Elton John publicly questioned his sexual orientation, that he hired a hit man for $50,000 to kill the pop star at a concert in California. That’s according to Gest’s bodyguard, who is revealing secrets to a British tabloid, one year after the reality star’s death.

Imad Handi told the Sun that the motivation was revenge for John’s remark, “I’d love to buy Liza a heterosexual husband,” shortly after Minelli wed Gest in 2002.

The joke sent Gest flying into a rage.  “I’m going to kill that motherfucker,” Handi quoted him as saying. “He’s a dead man.”

According to Handi, Gest himself found the unnamed hit man, and had Handi give him a downpayment of $25K to take out Elton John at a 2003 concert in Anaheim, California.

“He looked me in the eyes and said, ‘I want him dead’” Handi recalled in his interview with the tabloid. “I think he was so angry because Elton rumbled who he really was.”

Handi did as he was told, claiming, “I felt guilty but I felt loyalty to David.” And that’s when the bodyguard began his effort to convince Gest to call off the hit, which was scheduled for January 17, 2003.

I started to really worry about being implicated and at the start of 2003 I pleaded with him to call it off.

He eventually said OK but told me I had to get his money back.

Minelli divorced Gest, her fourth husband, in 2007 and he died in 2016, after a stroke. Prescription drugs were found at his bedside. Minelli had accused him of trying to poison her and control her with drugs, while Gest filed court papers accusing her of giving him herpes.

The Sun reports Hindi is telling his story because he is angry to have received only $29,000 of Gest’s estimated $50 million estate. Among his other allegations: Gest wasn’t gay, he was bisexual and considered Simon Cowell of American Idol fame his “dream man;” was addicted to gambling and cocaine, routinely spending $620-a-day on drugs, and once bet and lost nearly $1M in just one evening; and enjoyed “drug-fuelled parties” with the late singer Amy Winehouse.

Will Hawaii force insurance to pay for in vitro fertilization for gay couples?