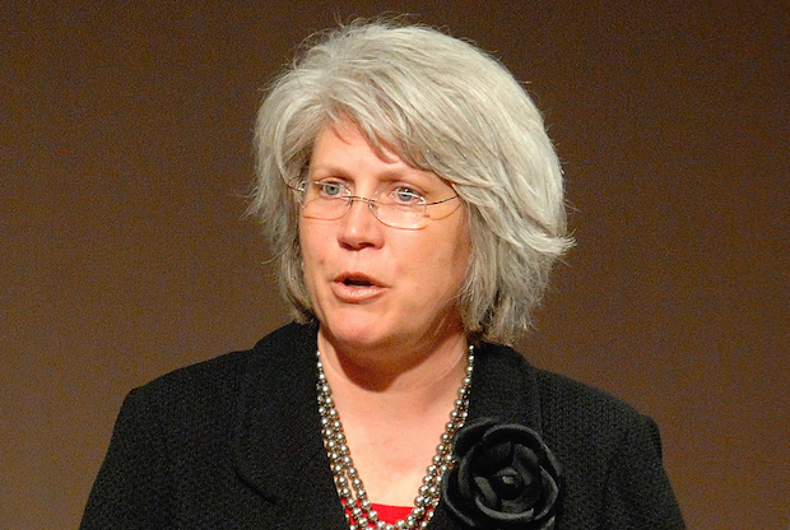 In this April 18, 2011 photo, Jane Meyer, senior associate athletic director at the University of Iowa, speaks in Normal, Ill. Meyer, the former no. 2 administrator for Iowa athletics will square off against the school in a trial beginning Monday, April 17, 2017, that centers on her claim that she suffered discrimination as a gay female who fought bias in college sports. Photo: Lori Ann Cook-Neisler/The Pantagraph via AP

The former associate athletic director at the University of Iowa will square off against the school in a trial Monday that centers on her claim that she suffered discrimination as a gay female who fought bias in college sports.

The trial in a lawsuit brought by Jane Meyer is expected to litigate whether Athletic Director Gary Barta’s personnel decisions were necessary judgment calls or tainted by discrimination.

Several Hawkeye coaches, including football’s Kirk Ferentz, are expected to testify at the trial, scheduled for up to three weeks in Des Moines. Lawyers told a judge Thursday a last-minute settlement wasn’t likely.

Jurors will determine whether Meyer suffered workplace discrimination due to her gender and sexual orientation, whether she endured retaliation for complaining of bias against female coaches, and whether she was paid less than a male administrator who performed similar work. If violations are found, jurors will decide how much to award Meyer in damages for pay and emotional distress.

Scholars who study gender say the trial will shine a light on how female administrators and coaches can face different treatment than men.

“What’s happening at Iowa isn’t unique to Iowa,” said Purdue University professor Cheryl Cooky. “Iowa might just be a real egregious example of some of these types of treatment that we’ve seen.”

Cooky said the trial, regardless of outcome, will injure “the morale and culture of the athletics department” and require healing.

The dispute dates to 2014, when Barta fired field hockey coach Tracey Griesbaum following an investigation into complaints about her treatment of some players. The firing drew protests from many players and fans. Griesbaum claimed that she was treated more harshly than male coaches and planned legal action. She had a powerful internal ally: Meyer and Griesbaum had been in a decade-long relationship.

Barta announced in December 2014 that Meyer would be transferred outside the athletics department while her partner’s litigation loomed. Meyer worked as a construction manager until last year, when the university eliminated her job and laid her off.

University lawyers are expected to argue that Barta committed no discrimination or retaliation against Meyer, who had been the department’s Senior Woman Administrator since 2001. They say he had concerns about Meyer and that he had to oust her after Griesbaum’s firing drove a wedge between them.

Barta testified in a recent deposition that Meyer chastised him personally about the firing and in front of staff, saying her insubordination made it impossible to run the department. He said Meyer hadn’t disclosed her relationship with Griesbaum to him — a potential conflict of interest he claims he learned about from The Associated Press.

Meyer’s lawyers argue those claims are a pretext to justify the fact that Barta ended Meyer’s athletics career after she opposed his treatment of Griesbaum and others. They note her transfer came the day after she handed Barta a memo complaining about alleged bias, including his termination of other lesbian coaches. Those claims were never investigated.

It’s not clear how Barta wasn’t aware of Meyer’s relationship with Griesbaum. A university investigation into the field hockey program months earlier looked into the relationship and found no violations. Meyer says she disclosed it to others years earlier and was cleared.

Before Barta transferred Meyer, he hired Gene Taylor into a newly-created deputy athletic director job, which included some of Meyer’s duties. Iowa hired Taylor at a salary of $245,000 — $70,000 more than Meyer made after her 13th year.

Meyer, 57, argues the disparity amounts to an equal pay violation. The university notes Taylor earned a higher salary in his prior job at North Dakota State and that his position involved running the day-to-day operations.