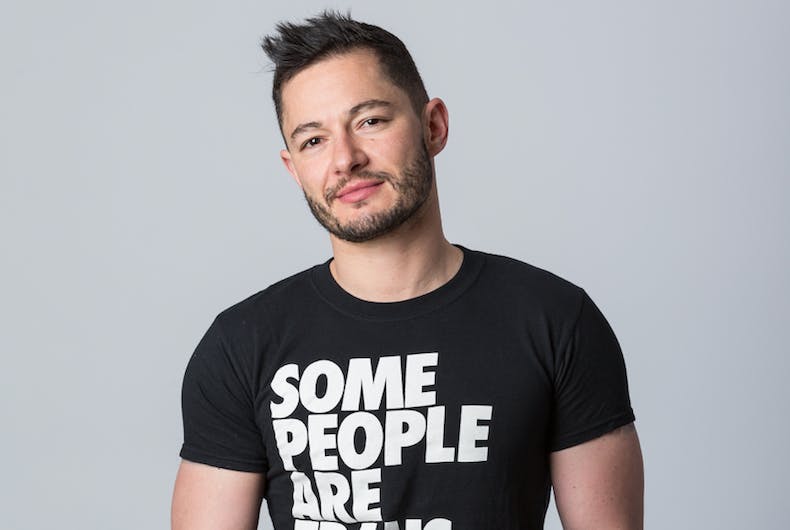 British director, writer and actor Jake Graf’s discomfort is palpable as he sits in the gynecologist’s waiting room in his short film, “Headspace.”

It’s not surprising given he’s the only male patient in the room.

Captain Hannah Winterbourne of the British Army acts her frustration as a woman trying to have her identity validated on the phone.

But she’s mis-gendered based on her voice.

“Headspace” was shared by Upworthy on Friday afternoon and offers a rare and intimate glimpse into the daily trials and tribulations of trans people across the world. British audiences saw the short film via HuffPost in February amassing 3.5 million online hits and translations into French, Spanish and Russian.

After its U.S. release LGBTQ Nation pinged a few questions across the pond to Graf who, in addition to his role in several short films, is known as one of the openly transgender actors in The Danish Girl.

LGBTQ Nation: Where did your inspiration for making “Headspace” come from?

Jake Graf: Whilst I think most trans folk would agree that life pre-transition is incomparably harder, there is a widespread notion that once a person has medically transitioned everything just magically falls into place and cares fade away. Speaking to all of my trans friends, I realised that we all still have those daily trials and tribulations that, whilst not debilitating, remain very difficult. I wanted to give an intimate and personal look at some of those, told in an authentic and honest manner that would hopefully make viewers stop and think.

Was it challenging to choose the scenarios to include in the film?

The scenarios that made the cut are some of the most common place, I think. Some criticism has been that I didn’t show the violence or transphobia, but this wasn’t about the horror stories, or the worst case scenarios, but what many trans folk face on a daily basis.

Who is your intended audience for “Headspace?”

It was designed to be an accessible, relatable and eye opening look for a primarily cisgender audience, and the reaction to “Headspace” has been great. So many people have messaged me from across the world to say that most of the situations had never crossed their minds, and that it had broadened their understanding of the trans experience. Also rather encouragingly, we have had a very positive reaction from within the trans community, with almost everyone finding at least one aspect that they too struggle with.

What can cisgender lesbian, gay and bi+ people do to be the best trans allies?

I think that we could all do more to be better allies to each other. There is a lot of backbiting and counter productive behaviour from both camps, cis and trans, when surely we should all be on the same side. I think more tolerance, kindness and patience across the board would be a great step forward. We all get marginalised and discriminated against by the same people, and I think that if we focused on our similarities rather than our differences, we would all get along a lot better.

What are your greatest ambitions as a filmmaker and what will we see in the future from Jake Graf?

Ultimately, I really want to be able to do this as a full time career. I would love to write and direct something for Netflix or Amazon and make a feature film that truly moves people, and stands the test of time. At the moment I am starting to work on my first feature, possibly an expansion of my most recent short film, ‘Dusk’, which has already won several awards. Also, the LGBT web series which I wrote and star in, “Spectrum,” launches online on May 1st, so Season 2 of that will be on the cards. Perhaps most excitingly, I have two very challenging film roles lined up too, so it should be a busy year. I would never have been able to do any of this pre-transition, so I do feel very lucky that I have got this far. Now the hard work begins!

Fiona Dawson is a Emmy®-nominated multi-media director, producer and writer. She directed Transgender, at War and in Love commissioned by The New York Times and created the media project TransMilitary.