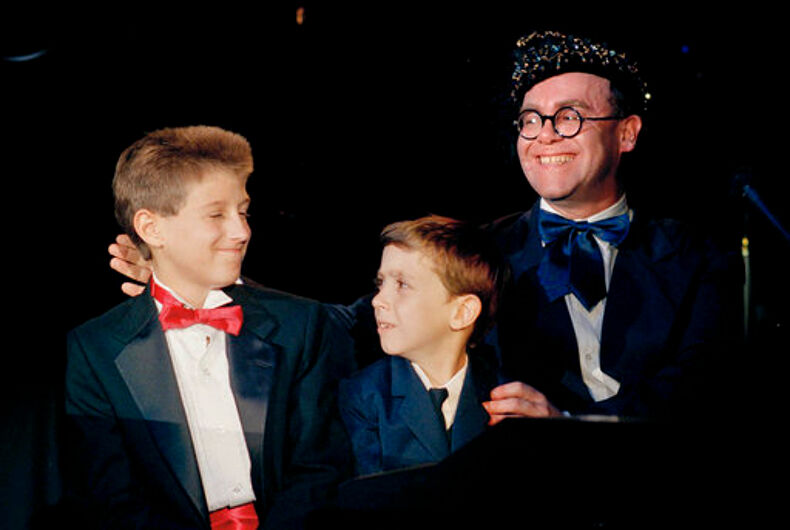 FILE - In this July 9, 1988 file photo, AIDS activists, Ryan White, left, Jason Robertson, center, and British pop singer Elton John appear together at "For the Love of Children" benefit for children with AIDS and other serious illnesses in Los Angeles. The Children's Museum of Indianapolis is planning a public exhibit displaying thousands of letters that people sent to Ryan White, a Kokomo, Ind., teenager who died of AIDS nearly 27 years ago. Photo: AP Photo/Alan Greth, File

INDIANAPOLIS (AP) — The Children’s Museum of Indianapolis is planning a public exhibit displaying thousands of letters that people sent to Ryan White, a teenager who died of AIDS nearly 27 years ago.

A museum spokesperson says the effort is part of a research project to shed light on public sentiment during the height of the AIDS crisis of the 1980s. Nearly 6,000 letters will be featured after a team of researchers from the museum and IUPUI studied them.

White, a Kokomo boy, contracted the disease during a blood transfusion for hemophilia when he was 13 years old. He became the poster child for HIV education and awareness.

His mother, Jeanne White-Ginder, will speak at the museum this weekend about the letters as well as the challenges her family faced during White’s last few years of life.

White was a student at Western Middle School in 1985, but parents and other children opposed his enrollment there because of his illness. He went on to champion HIV awareness and taught Indiana residents as well as people around the world more about the virus while dispelling myths about how it’s contracted.

Over 1,500 people went to White’s funeral at Cicero Cemetery, including Elton John.

“I would gladly give my fame and fortune if only I could have one more conversation with you, the friend who changed my life as well as the lives of millions living with HIV,” John wrote in an open letter to The Washington Post two decades after White’s death. “I was by your side when you died at Riley Hospital. You’ve been with me every day since.”

Museum officials are hoping that some of the people who wrote the letters will come forward to put context behind their words.