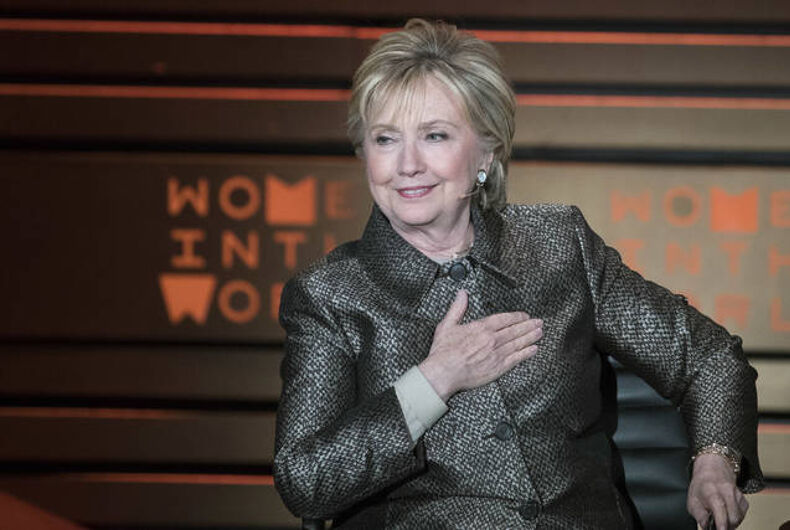 Hillary Clinton has not lost her sense of humor.

In her first interview since losing the presidential election to Donald Trump, Clinton told interviewer Nicholas Kristof that she is “doing pretty well all things considered.” The sting of losing the biggest race of her life, despite winning the popular election, has been eased by long walks in the woods and laughing at the Republicans epic failure to successfully replace Obamacare.

“I will confess to this: having listened to them talk about repeal and replace for seven years now, they had not a clue what that meant. They had no idea,” she said. “I don’t know that any of them had ever even read the bill – read the law, understood how it worked. It was so obvious. Health care is complicated, right? They don’t know what to do, and I do admit that was somewhat gratifying.”

She also revealed her favorite meme taking a shot at the GOP, noting the ridiculousness of having a group of exclusively men debating women’s reproductive rights. Trump, Vice President Mike Pence, and members of the ultra conservative Freedom Caucus met late last month in an attempt to drum up support for the unpopular American Health Care Act that ended up failing.

Appreciated joining @POTUS for meeting with the Freedom Caucus again today. This is it. #PassTheBill pic.twitter.com/XG6lQIy5a6

The spoof shows a table full of dogs ready to discuss feline healthcare.

“There is that classic picture of all of the men sitting around, deciding how they were going to defund Planned Parenthood and maternity care, and access to insurance for family planning and contraception,” she said. “Looking at that picture, you just think it has got to be from a skit on Saturday Night Live.”

“It can’t possibly be true,” Clinton said. “My favorite GIF (she means meme) on the internet was showing the dogs sitting around the table, and the caption was, ‘Now we will discuss feline health.’”

She added that while she is doing okay as a person, she is, like many of us, concerned about the future of our country under the leadership of the Trump administration.

“The aftermath of the election was so devastating,” she admitted. “Everything that has come to light in the days and weeks since have been all so troubling. I just had to make up my mind that yes, I was going to get out bed, and yes, I was going to go out for long walks in the woods, and spend time with my family.”