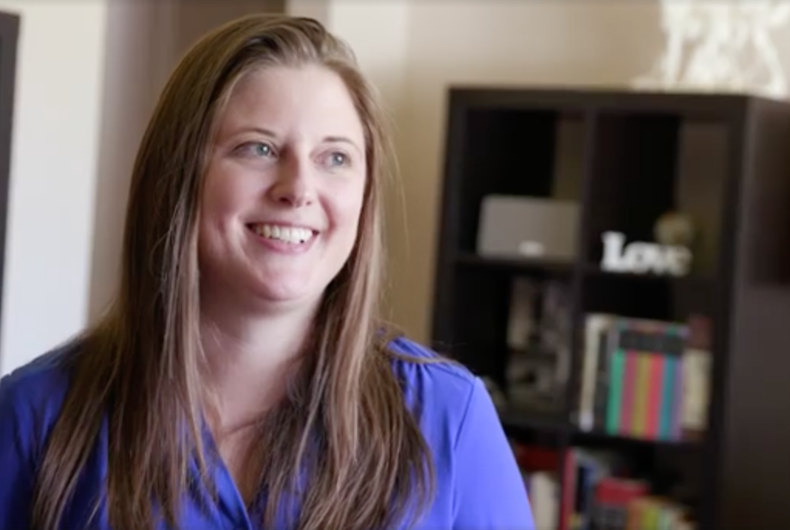 Last week, Alicia Johnston sent a breakup letter. But it wasn’t to a date, it was to her church.

Johnston had been the sole pastor at Foothills Community Church in Arizona for the past year, despite the fact that Seventh-day Adventists don’t technically ordain women.

But in addition to being a groundbreaking female church leader, Johnston is also bisexual. Adventists teach that same-sex attraction is a sin, and she knew she had to be honest with herself and her congregation.

“Through study and prayer, I’ve come to a place of complete disagreement with the Adventist Church on their teachings about LGBT people,” she said in a video filmed and edited by the husband-wife team that produced the documentary Seventh Gay Adventists. “And I don’t know how to minister anymore without being honest about that.”

Johnston is not the first LGBTQ pastor to leave the church, but she is the first to share a coming out video.

“It’s wonderful to finally be able to say ‘This is who I am,’ and that’s something I love about myself,” Johnston said.

Both of Johnston’s parents are first-generation Adventists and she shares some of her deep connection to the church in the video. But despite her love for the Adventist Church, she know that its position on homosexuality is hurting people.

“I want to break the deadly silence that exists in churches that don’t affirm LGBT people for who they are,” Pastor Alicia Johnston said in a release. “That silence has to be broken to reach queer people who feel today like I used to feel: ashamed, unwanted, and inconvenient. I also want to redeem the gospel itself that has been twisted to represent the values of the privileged instead of justice and protection of the vulnerable, which is the true message of Jesus and of the Bible.”

Making peace with her own sexual orientation was a challenge.

“The hard part for me is that I was so just so aware of the pain that the church causes to people — ‘those people’ — that I didn’t accept my identity until my theology changed,” she explained in the video.

Johnston has a Masters in Divinity from Andrews University, the Adventist Church’s flagship school, and previously served as a counselor. She said she hopes that her story will help LGBTQ people in the church and inspire some change in theology.

“Pay attention to the lives of those your theology is impacting. Understand their language and their lives,” Johnston said. “Give them a seat at the table and listen and learn with respect. Honor the vulnerable.”

Watch the full, inspiring video below.