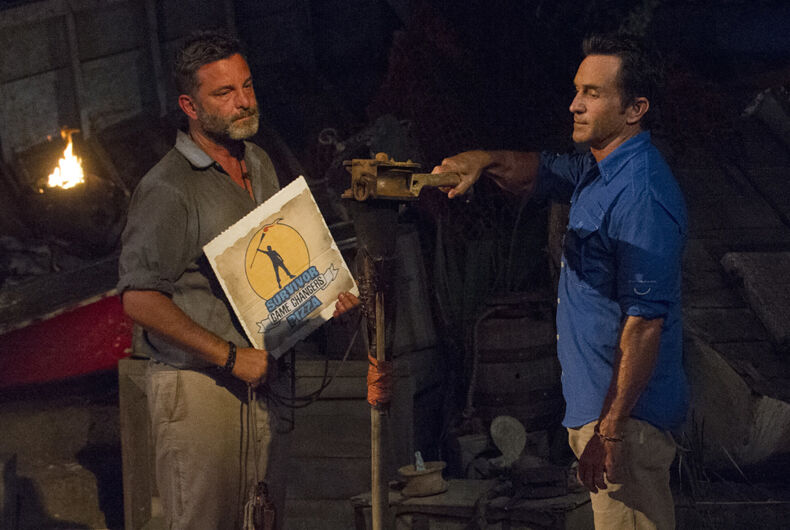 Former "Survivor" contestant Jeff Varner is off the island and out of a job after an episode in which he outed a transgender competitor aired.Photo: Screenshot

The gay man who outed a transgender Survivor competitor on national television says he has lost his real estate job over the media uproar.

The episode aired Wednesday and Jeff Varner, a former news anchor and real estate agent from North Carolina, spent much of Thursday giving tearful and apologetic interviews about his decision to out contestant Zeke Smith.

Smith became the first out transgender Survivor contestant when Varner outed him during tribal council in an attempt to paint him as deceptive, asking: “Why haven’t you told anyone you’re transgender?” Like all the competitors on this season of “Game Changers,” Smith and Varner were trying for another chance at the million dollar prize, and Varner has since said he regrets the low blow. Smith appears in future episodes of the reality TV show.

‘Yep. I did that,” Varner said in a statement on Twitter. “And I offer my deepest, most heartfelt apologies to Zeke Smith, his friends and life allies, his family and to all those who my mistake hurt and offended.”

Later on Thursday, the real estate agency he worked for reportedly let him go because he is “in the middle of a news story that [they] don’t want anything to do with,” Varner told the News & Record. The newspaper had not yet reached his employer for comment.

Varner had just launched his real estate career at the beginning of this year, getting hired on by Greensboro’s Tyler Redhead & McAlister real-estate firm shortly after getting his real estate license last December. At the time, the firm expressed excitement over having the familiar face of the former TV anchor and three-time “Survivor” contestant on their team.

An article in the Triad Business Journal in February noted that, thanks to his celebrity, when Varner meets with client, people “either recognize him immediately or think he looks familiar.”

“We’re really excited to have him,” Kristen Haynes, who led Varner’s team at TRM, said at the time. “He’s got an incredible personality and he’s a really smart guy. It’s been a whirlwind. He’s already getting a lot of calls.”

According to the News & Observer, he left that firm three weeks ago for Allen Tate, but is no longer listed on their website.

As it turns out, not all press is good press.

U.N. urges action on gay killings in Chechnya as Kremlin denies the problem