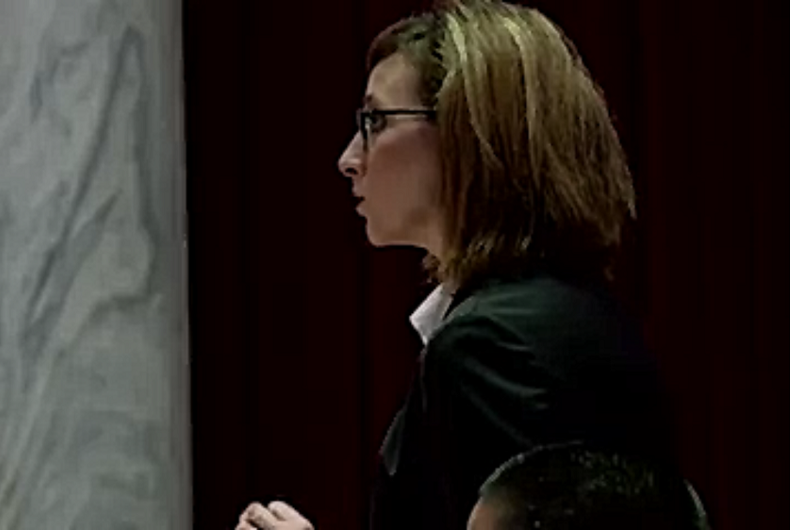 The West Virginia Supreme Court heard arguments about whether a man who obviously committed an anti-gay hate crime could be prosecuted for that hate crime.

Two years ago, Zackary Johnson and Casey Williams kissed while walking along a street in Huntington, West Virginia. A men in a car shouted homophobic slurs at them, got out, and started beating both men. One of the men recorded the attack with his phone and the assailant was quickly identified by police as Steward Butler and arrested.

The defendant appealed the grand jury’s decision to the state’s supreme court.

County prosecutor Lauren Plymale argued in favor of this interpretation of sex discrimination that has been accepted by several federal courts.

First, she said that Butler was using sex stereotypes, which have long been accepted as a form of sex discrimination by courts. Butler thought that men should only kiss women, and therefore he attacked the couple because they failed to conform to a sex stereotype.

Last, she said that if either man had been a woman, then Butler would not have attacked them. That’s quite simply discrimination based on sex.

In an unusual turn of events, the state prosecutor is on the opposite side of this argument from the county prosecutor, and sent Solicitor General Elbert Lin to argue that this was not a hate crime based on sex. He said that if either man had been a woman, then Butler would have perceived their sexual orientation as straight, which means that he was discriminating based on sexual orientation.

This argument is just repackaging Plymale’s point, though. Both are saying that Butler used sex stereotypes that ultimately led to him beating up the victims, it’s just that Lin is focusing on a middle step – when Butler used those sex stereotypes to guess the victims’ sexual orientations – and saying that Butler was motivated by animus against gay people.

The law, though, does not require that the only motive for a hate crime is discrimination against a protected class. It just has to be part of the motivation.

Also, while the “sexual orientation discrimination is a form of sex discrimination” argument has been accepted when it comes to employment and housing discrimination, criminal law is different. If a law is ambiguous, it must be interpreted in favor of the defendant. This is to prevent people from being put in jail for things they didn’t know were crimes.

While it’s obvious Butler knew that he was committing a crime here, he might have reasonably believed that it wasn’t a hate crime in that state. I can’t read his mind, though, and I’d be surprised if he thought that much about what he was doing as he was shouting slurs and beating people up.

Plymale argued as much, saying that “a person of ordinary intelligence would have fair notice” that this is a violation of someone’s rights based on sex, and that the law isn’t actually ambiguous.

Slate‘s Mark Joseph Stern says that judges were not sympathetic to Plymale’s arguments and were pretty chummy with Lin, so they may decide that this was not a hate crime in the state of West Virginia.

And since it’s West Virginia, it’s unlikely that hate crimes laws will be updated to include sexual orientation and gender identity any time soon. So at least in that state, beating someone up for doing something that is perfectly legal because the attacker hates who the victim is probably not a hate crime.

Who stabbed this gay trailblazer to death in his own apartment?