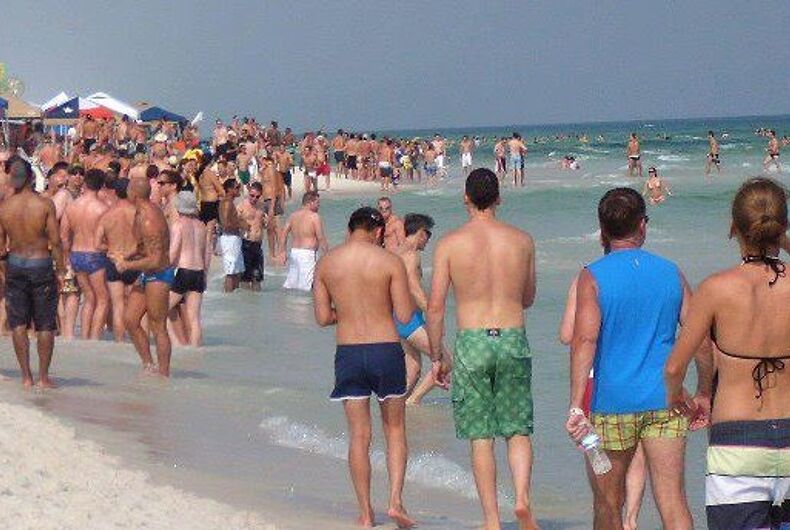 Since the 1960’s, LGBT people have been meeting at Pensacola Beach for what eventually became known as “Gay Memorial Day Weekend.” This year, though, they’ll have to share the beach with a conservative Christian concert.

Gay Memorial Day Weekend, also sometimes called “Memorial Day Pensacola Beach Pride,” is a yearly gathering on the beach that by the 1990’s had grown into a large, organized event, including circuit parties and drag shows. The event has attracted thousands of revelers some years, often wearing rainbow flags and digging out jacuzzis on the beach.

This year, the event is scheduled for May 25th to the 29th. Steve Webster, a Los Angeles-based concert organizer, has organized a free Christian rock concert for May 27th on Pensacola Beach.

A spokesperson for Webster told the Pensacola News-Journal, “The LGBT community is welcome to come. This is free and everyone is welcome.”

While everyone may officially be permitted to attend, the concert will clearly not be a place where LGBTQ people will feel “welcome.”

The emcee of the event is Wendy Griffith, a co-host of The 700 Club. Normally, her role on the show is to sit next to Pat Robertson while he espouses bizarre and hateful views on national television. For example, she isn’t even seen for most of this infamous 2014 video of Robertson complaining about how straight people can’t stone gay people anymore, but responds at the end with a smile and a “Well said, Pat.”

Griffith does have a few hits of her own. In 2013 she described transgender girls as “still boys but they dress like girls” and said that they make others “uncomfortable,” at which point she wondered why people make so much fuss about “less than 1%” of the population while she was making a lot of fuss about that minority group using the restroom.

She also wrote an un-dated article for the website of The 700 Club where she accused gay and lesbian Christians of being “unmoved” by the Bible and claimed that the Bible “clearly condemn[s] homosexuality.”

The only act announced for the concert so far is the Christian rock band Kutless.