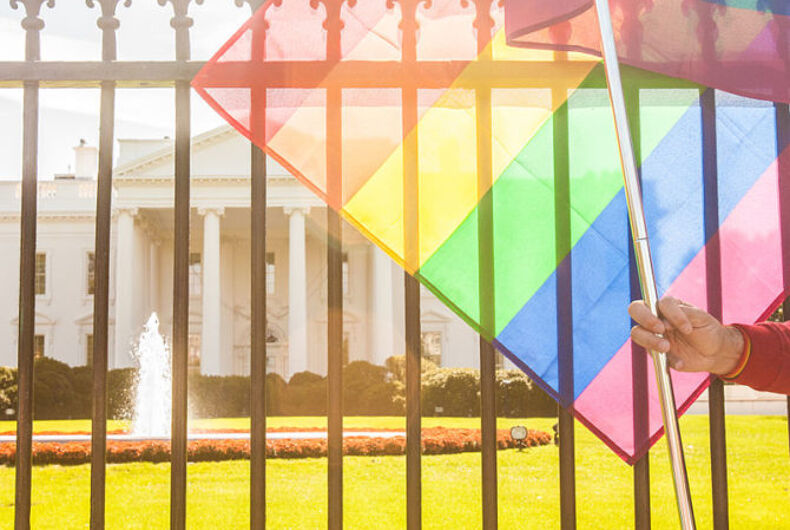 A demonstrator holds a rainbow flag up to the White House fence.Photo: Wikimedia Commons, CC 4.0.

An official in the George W. Bush White House who helped relocate and fire gay employees has found a new home in the Trump administration.

James Renne was appointed as a member of the Trump transition team at the Office of the Director of National Intelligence and was hired Jan. 30 in a senior role at the Department of Agriculture, reports ProPublica.

Renne was hired in 2004 as deputy special counsel of the Office of Special Counsel, an agency tasked with protecting government employees from retaliation for whistleblowing. An inspector general report showed that both he and his boss, Special Counsel Scott Bloch, came up with a plan to send gay employees to a new office they created in Detroit. Those who refused to be transferred were fired.

It went on to say Renne and Bloch appeared to be motivated by homophobia, noting finding “facts which reflect that Mr. Bloch and Mr. Renne may have been motivated in their actions by a negative personal attitude toward homosexuality and individuals whose orientation is homosexual.”

According to retired Army Lieutenant General Richard Trefry, Bloch told him that he had inherited a lot of gay employees and that he “had a license” to get rid of them, and that he planned to “ship them out.”

Bloch was also found to have messages in his official email account “containing anti-homosexual themes that appeared to have been forwarded from his personal email.”

He also had a tendency to negatively describe predecessor, Elaine Kaplan using “negatively-phrased assertions regarding her sexual orientation.”

Language noting that sexual orientation was part of protections against employment discrimination disappeared from the agency website during Renne and Bloch’s time there as well.

Renee was reportedly the reason for the removal of that language. As the report states:

As for the actual process of removing material from the OSC website, one senior career official who observed the effort characterized it as a frenetic burst of activity that took place late into the evening of one day (February 4, 2004). At that time, Mr. Renee was depicted as intently searching the OSC website with the assistance of a senior career official to identify passages which interpreted (the nondiscrimination law) as extending protections to employees on the basis of sexual orientation. According to this account, Mr. Renee demanded that OSC’s information technology manager remove these materials from the website immediately. OSC email records reviewed by the investigative team made it clear that in the haste to remove material, several passages addressing sexual orientation discrimination were missed, and that follow-up deletions from the website continued to be made for some time thereafter.

Further, it notes that hardcopy materials relating to the issue were also done away with, either through revisions or withdrawals.

The change resulted in congressional hearings and a criminal investigation.

A formal complaint noted Renne had signed a “Concerned Catholic Attorneys” letter in 2000 that is a broadside against a range of gay rights efforts. It warns that the “homosexual lobby’s power has grown exponentially.”

Renne declined comment on the story, and Bloch characterized it as being “filled with untruth, outright falsehoods, and innuendo.”

Bloch denied targeting gay employees at the time. An FBI raid of his home resulted in his pleading guilty to a misdemeanor due to his hiring of the company Geeks on Call to do a “seven-level wipe” on his government computers.

The inspector general’s report was based on interviews with more than 60 people and examination of over 100,000 emails.

Will a pro-LGBT Democrat take the congressional seat vacated by HHS secretary?