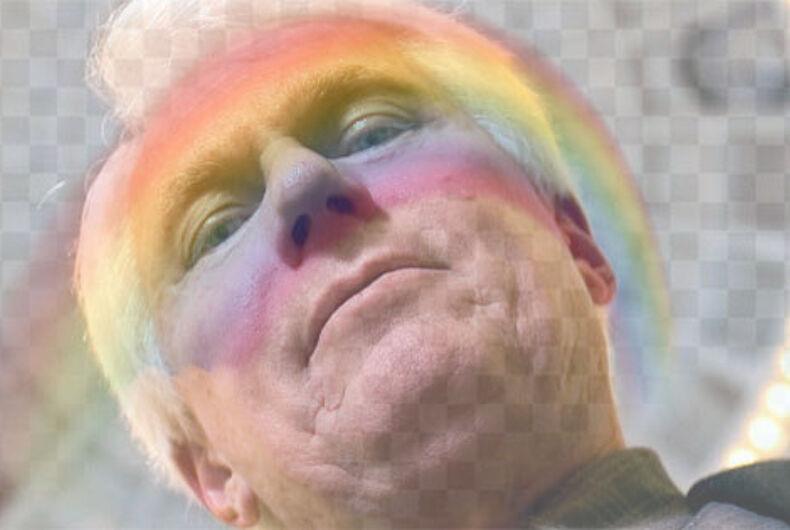 And lo, the Word was handed down on high, to the antigay activist, preacher and American Family Association radio host Bryan J. Fischer, that God wants His rainbow back.

Sorry, what now? Behold: the tweet posted on the Sabbath:

Worst example of cultural appropriation ever: LGBTs stole the rainbow from God. It's his. He invented it. Gen. 9:11-17. Give it back.

As the Chicago Tribune’s Rex Huppke wrote, this is bad news for the LGBTQ community, who just on Friday mourned Gilbert Baker, the activist who created the rainbow flag. But Fischer — who Huppke predicted is “the likely future star of ‘Law & Order: Divine Victims Unit’ — doesn’t seem to understand “why Baker’s flag remains important,” as Huppke wrote.

The gays, lesbians, bisexuals and transgender people who have come out of the closet to wave Baker’s creation around the world, he wrote, “continue to fight not just for civil rights but, in some cases, their very right to exist.”

I’m sorry, Mr. Fischer, but the rainbow on that flag still has work to do.

So you can go on thinking that God feels ripped off if you want.

But you’ll find the world a better place if you consider that God and Mr. Baker might be looking down right now admiring their handiwork, marveling at the beauty of bent light and changed minds.

Twitter saw something of a Big Bang in response to Fischer’s demand that we surrender the rainbow.

You caught me @BryanJFischer pic.twitter.com/R5cEYU69lz

BREAKING: God holding a press conference in which he distances himself from Bryan Fischer and says he loves his dead gay son pic.twitter.com/pIgOT4NV2N

#LGBT's stole the rainbow from god! 🏳️‍🌈😱 Next: Bryan Fischer will be attacking @Skittles for allowing us to taste it 😂 https://t.co/UCljGmoPlh

No, @BryanJFischer, we won't. We stole a real rainbow from the sky & next we're coming for the sun!!! https://t.co/NJYHL6DkF6

Oh, I think God is much more concerned with your hateful behavior while posing as a "Christian". 😏🏳️‍🌈

Just thought I'd send along a pic of my husband and I. #LoveIsLove #LoveAlwaysWins pic.twitter.com/eQtJBs7UiA

Huppke noted that Fischer spent the Sabbath morning tweeting “rather than praying for forgiveness for his insistence that ‘homosexuality gave us Adolph Hitler,'” a fact that brought to mind another biblical verse:

Q: My neighbor who insists on working on the Sabbath.. Exodus 35:2 states he should be killed. Am I morally obligated to kill him myself?

And if God did invent the rainbow, then logically this conclusion is inescapable:

Hate to break it to you, but God invented gays too