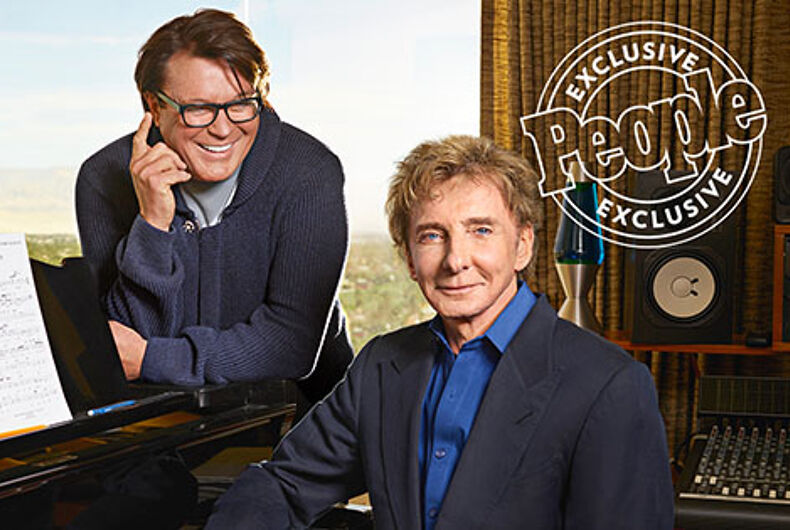 Barry Manilow is gay and he wants the world to know he and his husband — and manager — are very happy.

“He’s the smartest person I’ve ever met in my life — and a great guy, too,” Manilow said of Garry Kief.

No, this is not fake news, and not one of those, “I thought we all knew that a long time ago” stories.

People magazine reports the “fiercely private” 73-year-old pop icon invited a reporter and a photographer to their Palm Springs home for an exclusive interview and photo shoot. The singer talked for the first time publicly about his nearly 40-year romance with Kief.

“I’m so private,” Manilow said, fiercely, one presumes. “I always have been.”

Not surprisingly, the Brooklyn-born singer composer confessed his first love was music, followed by his high school sweetheart Susan Deixler. “I was in love with Susan,” Manilow said.

They married after graduating high school but, he said, “I just was not ready for marriage.”

Raised by his single mother, Manilow claims he never struggled with his sexuality during their one-year marriage. “I was out making music every night, sowing my wild oats — I was too young. I wasn’t ready to settle down.”

Manilow told the magazine he met Kief, a TV executive and Houston native, in 1978, and fell in love.

“I knew that this was it,” said the man who brought the world “Mandy,” “Looks Like We Made It,” “Copacabana (At the Copa)” and “Can’t Smile Without You.”

Thus began not only a nearly-four decade relationship as manager and singer but also a secret love affair.

“I was one of the lucky ones,” Manilow said. “I was pretty lonely before that.”

Of course, Manilow’s sexuality was an open secret to his long-devoted, mostly female fans, but People calls his coming out “a shock to others,” given that for a time, he lived with television production assistant Linda Allen, during his relationship with Kief.

Manilow and Kief finally married in a clandestine ceremony at their 53-acre Palm Springs estate in April 2014.

Will Hillary’s hometown choose this woman to be NY’s 1st elected trans official?