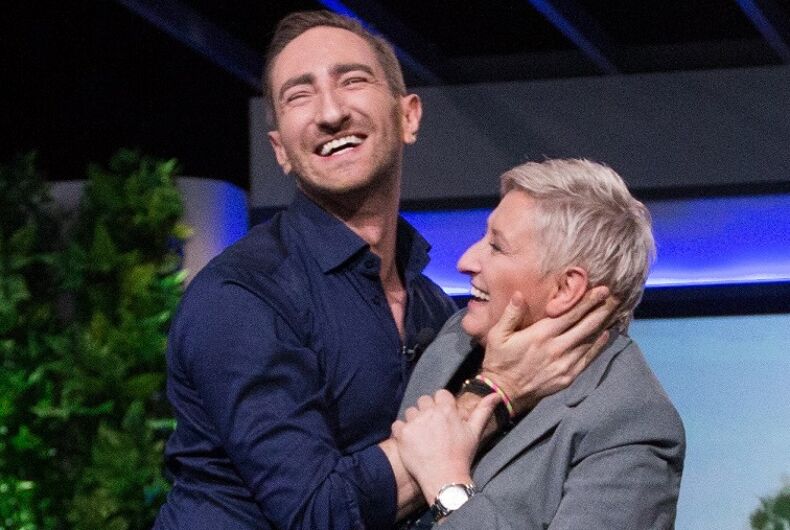 A Polish vlogger who loves Ellen showed just how much, when he built his own replica of her TV studio, found an Ellen lookalike, then filmed an interview with “Ellen.”

Lucasz Jacobiak is something of a sensation in Poland. His YouTube channel 20m has been the most popular channel in Poland for three years now, but Lucasz wants something more: to appear on The Ellen Degeneres Show.

Ellen’s show is shown in Poland, but Lucasz first found out about her talk show online.

“I admire Ellen for her courage,” Lucasz told LGBTQ Nation. “Generally, I appreciate everything that stands out of gray reality.”

Also a motivational speaker, he promotes visualization techniques to help people achieve their goals. According to Lucasz, seeing one’s dream is an important step to making it a reality.

But Lucasz did himself one better and actually produced a segment of The Ellen Degeneres Show, complete with an Ellen doppelgänger and an accurate reproduction of Ellen’s studio.

The set itself was a project. “I rented a production company, which covered all the work. We’ve been building the studio in the rented hall for three weeks. The 3-D printers made a few elements that we couldn’t buy. The mugs and the album I bought in Ellen’s online shop.”

It took Lucasz a year to find Beata Skokowska, whose resemblance to Ellen is uncanny. “I published posts on my social media seeking for an actress,” Lucasz said. He couldn’t find an actress who looked just right, but one of his friends knew Beata, who is not an actress by training. The audio is dubbed with the vocals of Klaudia Siczek to have the right accent.

Lucasz’s mother also appears in the video, and she didn’t know that this was a visualization exercise. “During the next call I told her that I needed her real emotions for my visualization. My mom supports me in all my crazy projects. Sometimes, my mom asks me whether I know what I’m doing and won’t end up in prison.”

The video was convincing enough for Polish media. Polish Glamour raved, “To his countless list of successes Luke Jakóbiaka soon be able to add another – an appearance on the popular American program The Ellen DeGeneres Show,” saying that the episode aired on January 3rd, 2017.

“Luke Jakóbiak fought it for three years, and it worked! The correspondent appeared on the famous talk-show of Ellen DeGeneres,” read an article on MSN Entertainment.

Lukas hopes that he will one day appear on the real Ellen Degeneres Show.

This isn’t the first time Lukasz has fought against the odds to achieve his dreams. He tried for years to be hired by television stations in Poland with little success, so he made his own YouTube channel. He wrote to everyone he could think of to find guests to appear in his tiny studio apartment. His perseverance paid off; even the president of Poland has appeared on his YouTube show.

Lukas has more projects in mind. “What I really dream about is doing an interview with Madonna. What should I do? I guess I already know!”