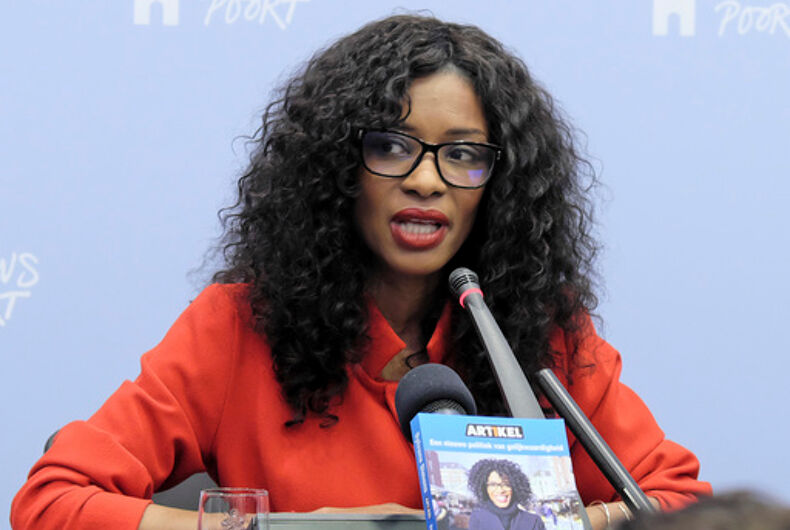 TV presenter Sylvana Simons lanswers questions during a book presentation in The Hague, Netherlands, Friday, March 3, 2017. Simons is taking her campaign for equality in Dutch society into the country's Parliamentary elections. Simons, who is of Surinamese descent and last year endured a stream of online racial abuse, has named her party Article 1, after the opening paragraph of the Dutch constitution, which outlaws discrimination based on race, religion, gender or any other reason.Photo: AP Photo/Mike Corder

THE HAGUE, Netherlands (AP) — Television commentator Sylvana Simons is taking her campaign for equality in Dutch society into the country’s elections.

Simons has for more than a year endured a stream of online racial abuse following some of her remarks on TV, including questioning a talk show guest about language he used to describe migrants arriving on boats in Italy.

“The rest is history,” she said Friday, reading from a book that outlines her new party’s manifesto. “For those who missed it: tens of thousands of hate messages, death wishes, detailed rape fantasies with me in the main role.”

Simons, a former host for the Dutch version of MTV and a regular on nightly talk show “De Wereld Draait Door,” is the best-known of 20 candidates standing for a new party called Article 1.

The name is a reference to the opening paragraph of the Dutch Constitution, which outlaws discrimination based on race, religion, gender or any other reason.

“The trouble is, our Constitution’s first article is under pressure,” said Simons, a former dancer of Surinamese descent.

Her message of inclusiveness is a stark contrast to the polarizing anti-Islam rhetoric of lawmaker Geert Wilders, whose Party for Freedom is forecast to make major gains during the March 15 election for Parliament’s lower house.

Simons’ party has a fight on its hands to win a single seat.

While Wilders’ election manifesto includes banning all immigration and asylum-seekers from Muslim countries, shutting mosques and outlawing the Quran, Simons is pleading for inclusiveness and equality.

Simons said she wants The Netherlands to be a country where every citizen “feels safe and protected by their government and has the space to be whoever he or she — and everything and everyone in-between — wants to be.”

Article 1’s candidates underscore its intention to protect the rights of all members of Dutch society. They range in age from 18 to 82, and include a transgender man and a woman from Burundi who describes herself on the party website as feeling at home in various identities: “Vegan, non-binary transgender, black, queer.”

The Netherlands was long known as a bastion of tolerance and individual freedoms. It was the world’s first country to legalize same-sex marriage and has one of the most liberal drug policies.

But its society has turned increasingly inward in recent years with lawmakers like Wilders condemning the influx of Muslims and saying that Islam is incompatible with traditional Dutch values.

“It is bitter that in 2017 we need a party that is defending what we … agreed to do so long ago,” Simons said.