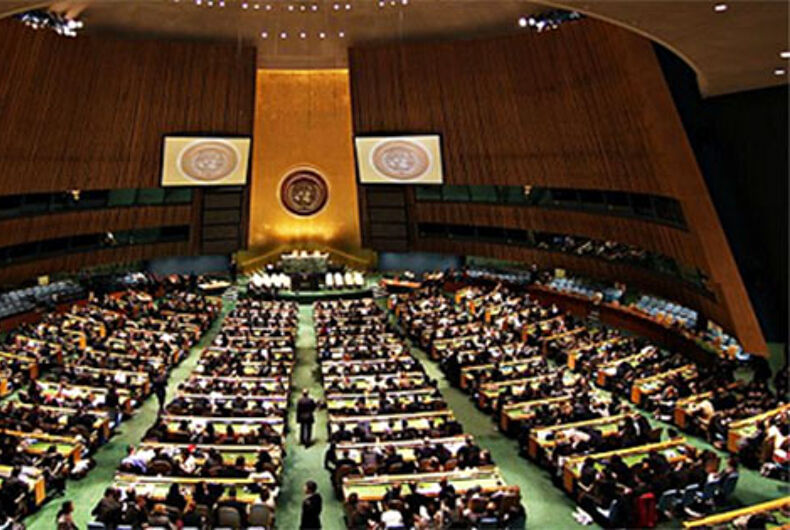 For 61 years, the United States has taken part in an annual conference at the United Nations that focuses on women’s rights, anti-discrimination, education, family planning and economic empowerment. But a human rights advocacy group is accusing the Trump administration of stacking the deck with conservative, anti-LGBTQ and anti-feminist representatives of two far right-wing groups.

OutRight Action International is calling out the Center for Family and Human Rights and the Heritage Foundation for opposing the U.N. human rights system, LGBTQ rights, and women’s sexual and reproductive health and rights. Those two groups were tapped by the State Department as part of its official delegation to the 61st annual United Nations Commission on the Status of Women.

Executive Director Jessica Stern issued a statement on their inclusion as representatives of the United States:

In their Senate confirmation hearings, Secretary of State Tillerson and US Ambassador to the UN Nikki Haley repeatedly pledged to uphold the right to be free from discrimination as an American value. The appointment of these organizations to the official US delegation undermines their positions. I urge Secretary Tillerson and Ambassador Haley to ensure that the US delegation maintains non-discrimination at the CSW [United Nations Commission on the Status of Women] in the face of obvious pressure from these newly appointed members of the delegation.

Fundamentalist notions about how women and girls should behave should never be the basis of advising or negotiating US foreign policy.

It is also a bad sign that two organizations that have tried to delegitimize the United Nations and human rights internationally now sit on the official US delegation. Maybe the violent mentality that got C-FAM labeled a hate group successfully panders to their base, but the US government must ensure protection for the world’s most vulnerable people.

The Center for Family and Human Rights, or C-FAM is labeled a hate group by the Southern Poverty Law Center. Its leaders have called for the criminalization of homosexuality and advocates violence as a means to an end, according to the OutRight group.

C-FAM president Austin Ruse is on record stating: “The penalties for homosexual behavior should not be jail time, but having some laws on the books, even if unenforced, would help society to teach what is good, and also would prevent such truly harmful practices as homosexual marriage and adoption.”

Then there’s the Heritage Foundation which is among the conservative organizations that have placed at least 11 former employees now working in the White House, according to OutRight Action International. It has called for funding for programs combating violence against women be cut, stating such programs amount to a, “misuse of federal resources and a distraction from concerns that are truly the province of the federal government.”

The Heritage Foundation claims laws that protect LGBTQ Americans from discrimination based on their sexual orientation and gender identity are unjustified, saying those laws “do not protect equality before the law; instead, they grant special privileges.”  Transgender people have been specifically targeted, based on the group’s claim that, “[W]e are created male and female and that male and female are created for each other.

Stern declared what the State Department is doing at the U.N. is a sign of what is to come here at home:

The same groups advocating against women’s rights, immigrants, Muslims, the Affordable Care Act, and LGBTI rights in the US are taking these views to the international stage. What the US says about women from around the world at the CSW [UN Commission on the Status of Women] will be a sign of things to come for American women, so it is essential that the US uphold American values and prevent all forms of discrimination at the CSW.